Nepal Update: Back to Pokhara

Sometimes I find it hard to believe I'm halfway round the world. And then I wake up.

Sure, there are similarities everywhere you go, I suppose. Like, I don't know, people close their eyes when they sneeze. Dogs bark all night long if you let them. The moon looks the same. And poor people are often the most generous people.

But so much here is different than at home. The bathrooms. The food. (Even store-bought Nabisco cookies taste different.) The weather. The customs. (Yeah, that's a big generality, I know.) The way people drive. The way people shake their head to mean "yes." (Took me a while to figure that one out.) I admit that, as awesome as it is to be able to be here and experience Nepal and work on this book project, I've gotten a bit homesick from time to time.

Like today, when I was crouched down under the cold water, trying to rinse the soap out of my matted hair as a huge palmetto bug--the one that had been in the shorts I'd been wearing until I undressed for my ... shower (?)--cowered in the corner of the bathroom. Just inches from me was the hole in the floor that is the toilet, where, so far, I've avoided dropping my brush or soap, which I foolishly keep setting down on the ledge just above it.

Yeah, at that time, I would have liked to beam myself home to stand under a warm, massaging shower after having actually sat down to pee. But, ah well, I suppose I'll have killer quads when I get home. Who needs Jazzercise when you've got hole-in-floor potties and shower faucets at about waist height? (Yes, there's one higher up, but the water just trickles out of that one--not enough to get the soap off of me or out of my fuzz.)

Do I sound like I'm complaining? Well, let me balance that out, then.

The hospitality here is amazing. My hosts really want me to be comfortable and make sure I have enough to eat and drink. Jith always offers me tea when I go downstairs in the morning. And Phulmaya--nearly every day she comes to my room to see if I have laundry and washes it by hand. Ingo often asks, "Are you well?" (I guess maybe I don't look so happy when I'm deep in thought, which I am a lot, so maybe he worries.) I really appreciate how they've welcomed me here and look out for my well-being. And Karna and Dikpal in Kathmandu--my trusted helpers and friends. I'll have to tell you more about them sometime.

Anyhow, I'm now back in Pokhara, on the quiet outskirts of town. Ingo and I flew back on Saturday--a 25-minute flight after sitting in Kathmandu traffic jams for two hours, made even worse than usual when the Maoists shut down streets in the middle of the city, forcing the taxi to take the long way around to the airport. It should have been a fifteen-minute ride.

So it's back to quieter, lazier days at the house, with views of corn fields and rice paddies and grazing water buffalo. Every morning, I get up at dawn to check if I can see the amazing Himalaya and watch people working in their fields. 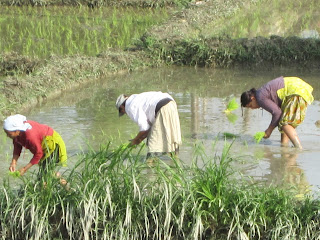 I do a circuit around the roof to see what I can see in all directions, then usually go back and read in bed for a while until the five boys go off to school. Then I go downstairs to eat the early meal with Ingo. The days here tend to have a simple, easy pattern to them, punctuated only by occasional business in town and some book sessions, where Ingo talks (and talks) and I listen and scribble.

Well, it looks like there will be a break in the routine when we head off to the jungle in a couple of days, to spend a little time at the rescue squad's base and dog training center in Shyauli Bazaar. It's a walled-in compound which includes a healthcare center, a school (although there are no students at this time), a resort that once catered to trekkers on the Annapurna Circuit (which has been re-routed away from there, thereby greatly impacting what was once a significant source of income for the squad), fish ponds, fruit trees and vegetable gardens ... and I don't know what else. I'm really looking forward to seeing this place that I've heard so much about and which is a significant part of the HRDSN story.

While I'm in Shyauli Bazaar, I won't have internet access. At one time, there was a good satellite connection, but that equipment, set up by two Enlishmen who met Ingo while trekking through the area about ten years ago, was pretty much destroyed (or rendered useless anyway) by the Maoists during the war. At this point, there is no money to replace the missing parts. So if you don't hear from me for a bit, it's just that I'm hangin' in the jungle near the Middim Khola river.

I'm sure I'll have lots of photos and stories to share when I get back. In the meantime, there are lots of new photos on the Facebook page, including a new album "Pokhara II." And here's one of my favorite recent photos, taken while stuck in traffic in Kathmandu. I just love how the little girl smiled at me even before I held up my camera and pointed at it, asking her if I could take her picture. She nodded and kept smiling. 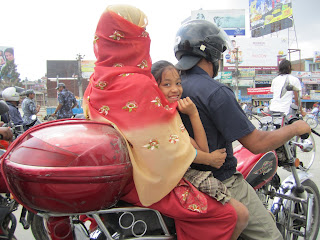 I have been following your story in search for information about Aubrey Sacco. From your last few post I assume that you are no longer a part of the SAR team looking for her. Is there any information you can add to your last post about her?

Well, I should clarify that I'm not a member of HRDSN, so I was offering my assistance as an independent volunteer ... though of course I was with the rescue squad and would have worked with them. And I was present at two meetings between HRDSN and Aubrey's father, etc. (HRDSN leader, Ingo Schnabel also accompanied them on two helicopter flights and assisted in talking to the locals when they landed, because he knows some of them and thier language and customs.)

But this search is under the control of the missing girl's father (not something that would happen in the U.S., where SAR/Law Enforcement would coordinate the mission), and he decided to use sherpas, Nepali police (who just walk trails and make inquiries, so I'm told), and now Maoists to do the searching. HRDSN has offered numerous suggestions, including posting a map on their website of some little-known trails in the area, based on 20 years of experience and extensive knowledge of Helambu/Langtang, but what is done with those suggestions, or what has been done, is up to the father and largely unknown to us (HRDSN and me). As far as I know, there have been no clues found beyond what was learned in the first few days of the search.

As I mentioned, SAR is not free in Nepal (although I don't know the father's arrangements with those who are searching; perhaps they are doing it in hopes of collecting the reward he's offered), so the person who controls the funds controls the search. HRDSN is unable to conduct an independent search because they just don't have the money.

There are lots of news stories on the internet now, including the videos from the Today Show and the Early Show. There's also the Facebook page. Nothing I've read or seen, though, seems to give or hint at any new leads.

I´m sure you will like it there. There is a place at a little pavillon where sometimes is a small internet signal. Maybe you´re lucky.
If you want to phone you may climb up on the mountain on the other side of the river. It´s enough if you reach a point app. 200 m down of the top. There you may use your own cell phone without problems ;-)))

Have a nice time and greets to all of the guys there!
Daniela

Thanks for the update on the status of HRDSN and the search for Aubrey Sacco. It's puzzling to think that someone who knows nothing about Nepal or SAR is directing the search efforts, while the experts in SAR are side-lined. Especially when that is the parent of the missing girl - how can anyone make objective decisions when carrying the emotional burden of their missing child. I hope it all turns out well for this family, though the fact that there have been no clues or sightings since April 21 does not bode well for them.

We were supposed to leave an hour ago, but apparently the person we're waiting for in order to head out is on Nepali time. :)

And thank you, Anonymous, for your comment. I agree with you!

We were supposed to leave an hour ago, but apparently the person we're waiting for in order to head out is on Nepali time. :)

And thank you, Anonymous, for your comment. I agree with you!