When you're riding in a taxi around Kathmandu, don't look ahead at what's coming at you or what you're moving towards (rapidly). Instead, direct your attention out your passenger side window and, while keeping all body parts well inside, take in the sights and sounds and marvel at how close the car can get to other vehicles, humans, and animals without actually touching them. 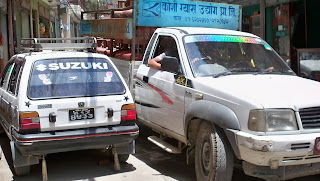 When you blow your nose after a day of wandering or driving around the city, don't inspect the tissue. It really is better not to know.

People don't just clear their throats here. They dig deep, seeing how much gunk they can remove from their esophogusses (esophagi?) and nasal passages in one fell swoop and deposit in the street. I just heard one such a clearing from my hotel room.

When you ride on the back of a motor bike around Nepal--as I did for the first time tonight--keep your mouth closed. Let's just leave it at that, shall we?

Today I saw a guy riding a bicycle with a sofa strapped to the back. I kid you not. 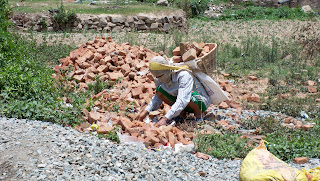 "Cheek" in Nepali is not a part of the face or tooshie. It is apparently a very bad word.

I'm told it's rude to offer to help clean up after a meal in a Buddhist household, which is where I'm staying for most of my time in Nepal. This could be habit-forming.

There is no such thing as "yak butter." A yak is a male. A female is a dri (or a nuk). But the Nepalis use "yak butter" kind of as a joke for (okay, about) us Westerners. I mean, if you try to milk a yak, that's not exactly a teat you're grabbing.

If you're clausterphobic or believe in overpopulation, check this out (Took this at Boudha Stupa yesterday.): 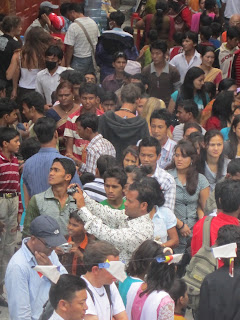 A whistle-blowing, gesturing cop in the middle of traffic in Kathmandu doesn't accomplish anything whatsoever. 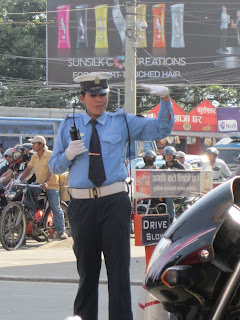 I will return to eating rice and dahl-bat morning and night as of tomorrow, when I return to Pokhara. (But I'm not complaining.)

Whow, Deb, I love to read your comments about Nepal´s specials ;))) I had to laugh so much.
Ingo told me very quickly to shut my mouth when I told about my pet bird named "Chicky"...

There are so many things to learn. But best of it - Nepali are considerate to us stupid Westerners and keep on smiling...