I'm back in Pokhara, lying in the little bit of shade on the concrete roof. A towel isn't nearly as comfortable as a beach chair or hammock would be, but at least there's a breeze out here. When the power went out around 11am and the ceiling fan stopped, my room suddenly became unbearable. I'm really looking forward to the rain to cool things down. It's been dry for a few days now.

So, we went on our little excursion to the jungle ... and I loved it! I'm hoping we'll be able to return to Shyauli Bazaar soon, where I can wander down to the Middim Kohla (river) and soak my feet or sit under a gazebo, surrounded by flowers and fruit trees, and listen to the harmony of bird songs while I write or read. And of course there are all the wonderful SAR dogs to visit me for pats and rubs while I work or just relax and enjoy the sounds of the forest and the river below.

We left on Friday, seven of us in a jeep, for the bumpy, beautiful drive to the village of Bhorletar. Sometime around 2pm, it started to rain--first a few fat drops and then an all-out deluge--and we drove through a road-turned-river, sometimes up to the bottom of the vehicle's doors. With no defrost and the windows closed, the driver could barely see, and I could barely stand the heat. I was relieved when we arrived at the village and I could get out of that thing. 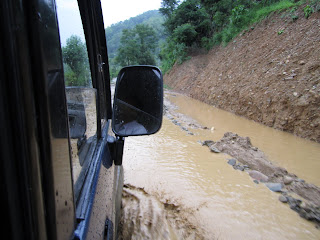 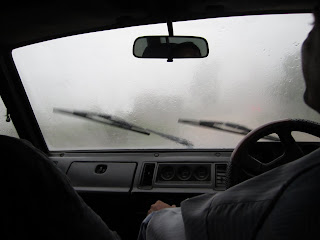 At Bhorletar, we were met by several porters, who'd walked from Shyauli Bazaar to help us carry our belongings, including a cooler full of perishables which a small, thin man, who looked to be in his 60s, hoisted onto his back.

The walk was wet and wonderful. I was happy to be hiking. First we walked through the village, then turned onto a trail that led us into the jungle, following alongside a little ... I don't know what you'd call it ... canal, I guess. Eventually, we descended to the Middim Kohla and walked along the valley floor for a while, bordered on both sides by dark green, thickly forested hills, broken up now and then by terraces of yellow-green rice paddies. 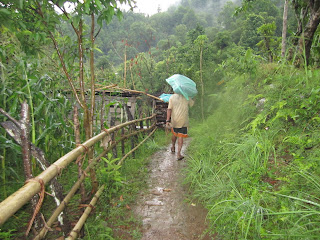 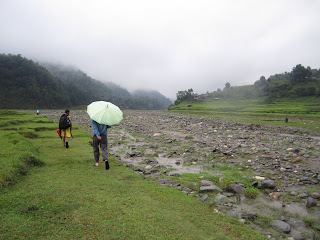 We crossed strands of the Middim Kohla several times, and eventually I saw our destination, recognizable by the blue metal roofs I'd seen in photos. We re-entered the jungle on a narrow path, then climbed concrete steps to a gated arbor. After passing between two buildings of the Riverside School, which I'd heard so much about, we were met by a herd of dogs--Maggie, Hunter, Aldo, Laxmi, Dunston, Helga, six growing Helga-Dunston puppies, and one black puppy (offspring of Susie, one of the two older dogs I didn't see)--and other members of HRDSN. I felt instantly at home. 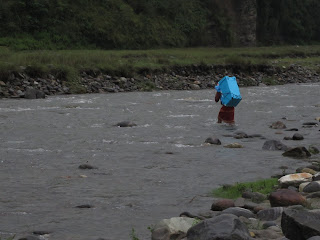 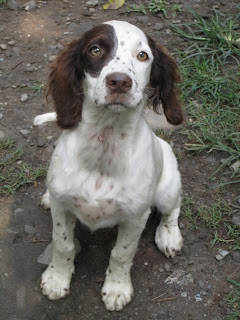 We spent three nights at the HRDSN/Middim Kohla compound at Shyauli Bazaar. In addition to working on the book project, using the digital voice recorder to capture Ingo's stories in his own words, I explored the area within the compound walls. I wandered around the health care center, the Riverside School, the SAR dog training area, the Middim Kohla resort and guest lodging. I saw the fish ponds, greenhouses and gardens, solar panels, honey bee hives, and smoke house. Ingo gave me a morning botanical tour of the property, where you can find pineapples, lemon and orange trees, avocado and mango trees, even coffee plants, to name just a small number of the more than 100 fruiting trees on the property. We visited the former rabbit house which will be used for something different in the future and the commercial-sized fish pond, now empty for cleaning and leak-testing. As the day quickly heated up, we retreated to one of many well-placed gazebos for a late breakfast and more stories. 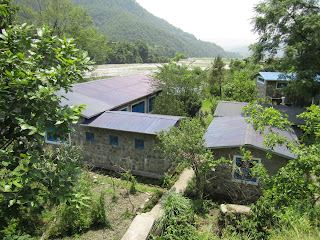 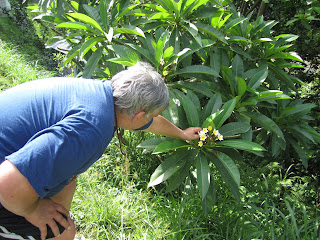 I also explored a bit outside the compound, wandering along the new road the Maoists are building, part of which runs right through HRDSN property. But the Maoists don't ask permission for such things, the apparently just do what they like.

On my walk, I saw some of the village huts and people out and about, steering the goats and water buffalo to preferred grazing spots, working in their gardens and rice paddies, climbing trees, walking to school and hour and a half away, and just sitting, watching the world go by very slowly. 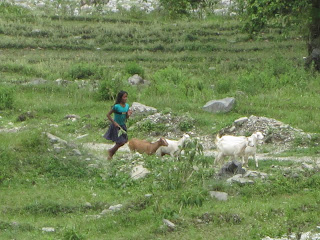 Oh, by the way ... about the Middim Kohla Resort (which is more like a retreat, really): It was once the main source of non-mission income for the Himalaya Rescue Dog Squad, when trekkers on the inner route of the Annapurna Circuit would stop for meals and often stay, sometimes for days, weeks and, on a few occasions, months at the HRDSN compound. But there are very few trekkers nowadays, in large part due to the 10-year Moaist "People's" War and the continuing political instability. In fact, there's been a severe decline in tourism all over Nepal. So a vital source of income for HRDSN has been lost, which is why their financial problems are so severe right now and have been for some time. Hopefully, that will change in the near future.

Anyhow, on Monday, Ingo and I and three others walked (or trekked, I suppose I should say) back to meet the jeep. But we went a different way than we'd come in, ending up at the village of Ram Bazaar and, this time, crossing a bridge over the widest part of the Middim Kohla, which I'm told will eventually fill the valley during the "real" rain season.

We walked early to avoid the hottest part of the day, then spent an hour or so in Ram Bazaar, waiting for our ride. Ingo chatted and laughed with local friends, while I people-watched, as usual. 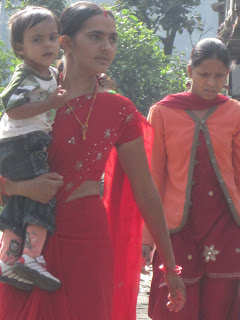 If you'd like to see more photos I took while waiting for the jeep and during the rest of this "field trip" to the rescue squad headquarters, I've added a new album here: Shyauli Bazaar