A Search Near Munds Park

"Everybody be quiet for a second!" I shouted. I had to raise my voice over the sound of the wind and radio traffic, neither of which stopped on my command. Nor did the racket caused by the icy pellets hitting my hood.

But my three tracking companions abruptly stopped talking, as I unzipped my jacket to turn down my radio. I thought I'd heard something just as we'd started moving again. If I had heard something, it was certainly far off and in the opposite direction than we'd been headed.

Another tracker said he thought he'd heard something as well.

"I'm going to shout," I told my teammates, then let out the loudest, high-pitched yell that I could. And then we all waited. Seconds later, I exclaimed, "Yes! I heard a bark!"  My teammates moved towards me and listened. Then we all heard it. Definitely a dog, and it was now actively barking.

We'd been told that the woman we were looking for had called a friend the previous afternoon and said she was going to walk her dog and then come home. But she never returned, and her vehicle was located the following morning at the overlook on I-17 south of Munds Park. We'd also been told that the dog, a husky/shepherd mix named Max, is aggressive and protective, so we should be very cautious if we encounter him. But, at this point, the barking was quite a distance off, across a canyon and possibly over the rise beyond.

Almost immediately, the four of us designated Tracking Team 3 took off in the direction of the sound, periodically shouting and blowing whistles then quickly stopping to listen. "Tanya!" we called, hoping to hear a shout back from the 39-year-old mother we were looking for. "Max!" we yelled, hoping the dog would keep barking.

Once down in the canyon, we lost the sound but kept moving. Eventually, we split up, with two staying in the canyon as it rounded the base of the hill and two of us heading upslope, trying to pick up the barking again.

We called and listened, called and listened, but it seemed the barking had stopped. As my teammate was talking with Incident Command on the radio, I moved further towards the far side of the hill and continued calling. And then I heard another bark. It still seemed rather distant. Was the dog moving?

The two of us continued on towards the sound, then stopped short. Suddenly, the barking was very close, and we caught sight of movement through the thick brush maybe fifty feet away. That was definitely Max! We watched the dog pace while we waited for our teammates to arrive before moving any closer. "Tanya!" we called a few times, but there was no response.  Was she over there somewhere?

Finally, four of our teammates arrived, and we all moved in. Max then moved off. No sign of Tanya in the immediate area. Two trackers followed Max, who was dragging his leash, and four of us began looking around.

Soon afterwards, articles of clothing were found mostly buried in fresh snow right where Max had been pacing. A definite sign ... but not a good one. We all knew this was likely evidence of "paradoxical undressing," a phenomenon often associated with severe hypothermia. One of the items was partially burned, indicating that Tanya had made a futile attempt to start a fire. But the other discarded articles of clothing were intact and not burned at all.

The four of us proceeded to search the immediate area, doing some "purposeful wandering" and then line searching as best we could over the dense, rocky terrain, looking under pinion pine and juniper bushes as we slowly worked our way back and forth. But we found no further evidence. Or Tanya.

After a long day of searching, often in blizzard conditions, we hiked out as our weary selves were replaced by fresh eyes. For the rest of that evening, throughout the night and into the next day the searching continued, with volunteers from our county and Yavapai County Search and Rescue working together. 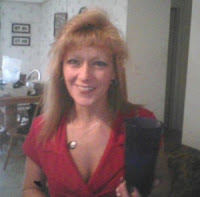 At around noontime on Wednesday, Tanya Morris's body was located by search dogs about 100 feet from where we'd found her clothing and boots. She'd been covered in snow and not immediately visible.

Added 3/16/10: Tanya Morris's obituary was in the paper today. She had four children and a life-partner of 14 years.

Just letting you know I'm thinking about you... I can imagine how difficult it is to have such a sad outcome.