SAR And The Art (?) Of Waiting

This had started out as Yavapai SAR's mission, since the search area was mostly in their county. But when a night and most of the next day went by without the subjects being located, our team was asked to assist.

The two men (one in his early 50s, the other in his 60s) had driven their UTV all the way from Camp Verde to where it eventually ran out of gas a long way down a network of Forest Service roads, somewhere between Beaver Creek and West Clear Creek.

Lucky for the stranded pair, who apparently had no provisions for staying out overnight in those cold and snowy/rainy conditions, they found shelter in a nearby "line cabin"--a structure used by cowboys out on the range--and were able to make a cell phone call to 9-1-1. I heard they'd told dispatch they were cold, hungry, and thirsty, but they weren't sure of their exact location, and the weather and road conditions were quickly deteriorating. So was their cell phone battery. And a cell tower ping provided only a very general area, so that gave us no additional information beyond what had been relayed to us by Yavapai County SAR.

So south we went towards the Mogollon Rim with six Coconino SAR volunteers and a Coordinator, towing our Mattrax (a Suburban with tracks instead of tires) and four snowmobiles, only to realize that the snowmobiles would be useless. There was snow on the ground and more coming down, but once off the pavement, there wasn't enough snow on top of all the mud and rocks to use those machines. So wherever we'd go, we'd have to go in the Mattrax or on foot, the hard way. But we had such a long distance to cover, slogging through the muck wouldn't be practical or really possible. And then how would we get the two men out if we located them? Using a vehicle was necessary.

First, we tried a short-cut to the search area, attempting to go in from the north near Stoneman Lake. As two of my teammates and I waited back at the furthest point our regular vehicles could go, the crew in the Mattrax continued on, successfully winching a large blowdown out of the way. But eventually they were stopped by a 20-foot-wide, fast-running, swollen creek and steep bank on the opposite side. We'd have to go the long way in from the south.

So, back on the freeway we went, then 12 miles down Forest Road 618 (I think it was), heading lower in elevation where the snow was replaced by rain and the mud only got deeper. Once again, three of us and our Coordinator waited for hours while the Mattrax crew did their thing from there.

Occasionally, when the precipitation let up, I'd get out of the truck to stretch my legs, slipping along the muddy road. At one point, I ventured into the dark amongst the pinion/juniper and prickly pear to pee and sunk to the tops of my boots in mud. Then I got back into the vehicle to listen for more radio traffic, pick away at a really yucky MRE I snatched from the Coordinator's stash (because I'd forgotten to replenish the food in my pack), yack with my likewise waiting teammates, and occasionally try to get comfortable enough to catch a few winks, which didn't happen.

Sometimes, going on a SAR mission means you are asked to stand by as backup. And I don't mind that at all (though, okay, I admit it; it's usually not much fun). But being a backup is important, and sometimes the backups turn out to be vital. In this case, though, I wasn't sure what kind of backup we three could provide, given that we had no other vehicle with us that could manage that kind of deep mud mixed with snow mixed with loads of rocks. Then again, we can't always anticipate what needs might arise, so wait we did through the night. At least we kept the Coordinator company as he did his ... well ... coordinating and information gathering. I know he appreciated us being there.

ANYway, at about 4am, those of us doing the waiting were finally sent back to Flagstaff, towing snowmobiles. At that point, the Mattrax was headed back to base, low on fuel, but the stranded men had not been located. And that was still the case when we arrived back at the SAR building at 7:00. At that point, Yavapai County volunteers were returning to the search area.

Sometime later that morning, I got a message on Twitter from a Yavapai SAR member, telling me they'd finally located the subjects, who were in good condition, though I'm sure they were extremely relieved to be back to warmth and food, home and family after two unexpected days and nights in that line shack. 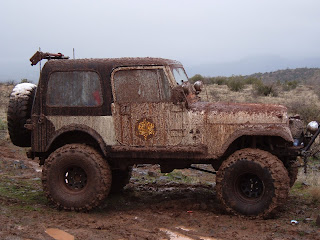 Thanks to you and the rest of your team mates for running that mission during the night for us !