Guess What I Got (And Training & News Too)

Heh heh, a new toy! Yep, now I can be a pest and take pictures (video too) of all things SAR. I'm photographically challenged, but I'll do my best to add some pizazz to my babbles from here on out with some images, though I'm sure, at times, it won't be possible--or right--to take pictures while on missions. Here, look, I think I figured out how to point and shoot: 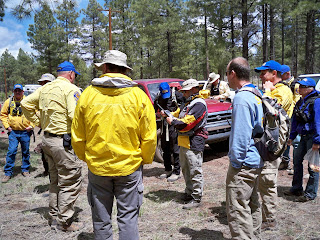 That's the team, getting ready for some training earlier today, on Line Search & Probability of Detection. We had a good turnout--fifteen of us, I believe, including four from mounted with their horses. 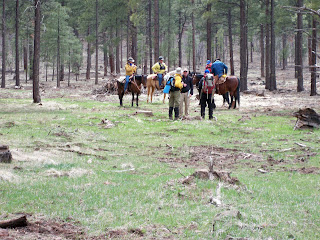 Basically, here's how it worked:

Yesterday, our team captain and other volunteers set up the course. They put out a bunch of 5-gallon buckets, all painted brown on the exterior in order to blend in with the surroundings. These buckets were spread out in the ponderosa pine forest, which is fairly open but still littered with forest debris, rocks and stumps, the latter resembling the buckets.

Behold, Nelson and a bucket.... 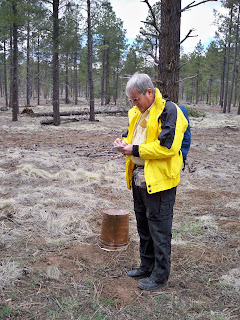 Today, we split into teams of three or four and, team by team, determined our "critical spacing." That means, an object roughly the same size as what we'd be looking for (in this case, it was an identical brown bucket) was set on the ground, and each person walked away from it to the point where the bucket could still be seen and identified as a bucket. We then counted our paces from that point back to the bucket. The average of each team's results was the critical spacing used for that team's line.

Now, using critical spacing usually means that each person is twice the pre-measured distance from the next searcher. That way, if the object is exactly between two people it could still be seen. Critical spacing is affected not only by the size of the object (which, of course, could be as big as an unresponsive person or as small as a bullet, perhaps), the terrain, the amount of brush, the weather, etc. Given the conditions and size of the objects today, our team's critical spacing turned out to be 30 paces or roughly 90 to 100 feet, which would mean that searchers could be 60 paces (about 200 feet) apart.

Given the size of the search area, however, and the number in our lines, we spread out at half critical spacing, or 30 paces apart (except for the mounted folks, who went two at a time, 60 paces apart). We all had radios in order to communicate, rather than shouting down the line. We'd say, "Team 1, stop" or "Team 1, start," stating our team number first, because there were other teams in the field, starting their lines moving forward at intervals. This photo shows the distance between me and my next teammate in the line, while another teammate paces off to his spot further out. 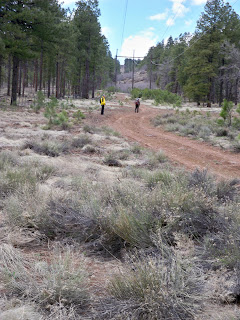 So, okay, each time a team member spotted a bucket, he or she would stop the line without pointing to the sighted bucket, and write down the GPS coordinates of their current location, the direction of the bucket from their location using positions on a clock, and then their approximate distance from that bucket. Sometimes, when the line stopped, other team members would spot the same bucket. Other times, the line would start up again, only to be stopped one step later, as someone else spotted that or a different bucket. So it was stop and go, stop and go. We didn't know until we finished how many buckets were in the field.

I know, this sounds awfully thrilling, doesn't it? But I enjoy searching, not to mention the company of my teammates, and this was like a treasure hunt to me. It was also good practice for staying in our grid, keeping an eye on the person to our right and maintaining our spacing. That's much more challenging in more variable terrain and dense brush than we had today, though.

After the exercise, we all gave our notes to our coordinator, who's going to do some calculations and explain the results at our next meeting. Until then, I'm not really sure what kind of POD information he'll give us, but I'll let you know when he does.

So that was today's event. That and playing with my new camera and some news. Members of our team, along with the adjoining Yavapai County team and others have been searching on and off for more than two and a half years for a plane that disappeared in the Sedona area. And that plane, flown by William Westover, a private pilot from Phoenix, with his passenger, Marcy Randolph, has been found in a canyon in the Secret Mountain Wilderness. Here's the article from the Arizona Daily Sun: Plane wreckage identified.

It actually does sound thrilling to me. I would consider things like this very interesting. Being part of a team searching for something would be an adventure, no matter what the circumstances.