First, a quick update: At the end of my last post, just as I was typing my final sentence, my pager had gone off--a call-out for a lost hiker in the Happy Jack area, which is approximately an hour outside of Flagstaff. Turned out to be one of those load up, drive, turn around and unload missions. The lost woman was located by air rescue and then a deputy on the ground before our team had left the city. The only real excitement that night was that we witnessed part of a meteorite event, with reports coming in to dispatch from all over the area, and it's possible one or more pieces may have hit the ground. We even heard air rescue say they'd been blinded by one of them.

(Psst! There's more "in the news" news at the end of this post, if you don't feel like reading my ramblings.)

Anyhow, this is day one of the 3-day navigation "boot camp" our team is sponsoring, with members of other agencies (along with some of our own teammates) in the class. I was asked to be an assistant instructor, particularly during the field sessions or if someone needs assistance during any of the classroom exercises. Today's topic is Alternative Navigation (navigating without a compass or GPS), tomorrow is Map & Compass and Sunday is GPS.

Here are a few photos from today's class, and I'll explain what they're doing:

Instructor Art Pundt from our team jumped ahead at the beginning of the class, to get right to determining direction from the sun. He did this because the sun was fading fast, as the day clouded up. 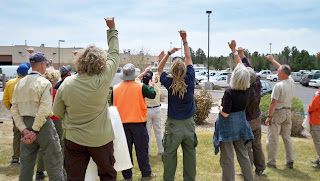 Here, you see students measuring one hand's width--from the outer edge of the hand to a comfortably extended thumb--from the sun's current location to find due (true) south, or close to it. It was around 11:30am at the time, and here in Flagstaff the sun is roughly due south at 12:30 (though the actual range is between 12:15 and 12:40pm, depending on the time of year). So being about one hour before "due south time" and each hand width being 15 degrees--or one hour of time in the sky--they measured one hand to the west. If it had been an hour past "due south time" or 1:30pm, they would have measured one hand width the other way--to the east. 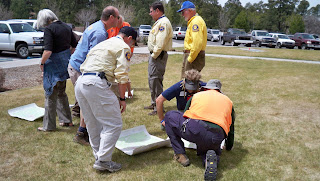 Once the students each determined true south, they were able to then orient their maps (being sure to turn them so the bottom of the map was facing south, rather than turning the top--map north--towards the south by mistake).

Once oriented, they could then choose a direction of travel by placing a pen on the map, from their current location towards their destination. (In this case, that was a random selection for demonstration purposes.) Facing the direction of the pen, they would then be able to walk while keeping the sun in the same location relative to their bodies, at least for a time. Without gadgetry, one could also use various other methods of alternative navigation in conjunction with the map to travel to a particular point--comparing terrain to the features on the map, using terrain "handrails," catch features, using check points and so forth. The key would be knowing your current location and finding it on the map to begin with. 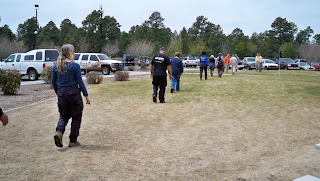 A little later in the class, Art discussed and then demonstrated how one can determine distance travelled, both by time and by pacing. In this photo, you see students counting paces over a distance of 100 feet, then repeating that experiment and averaging their results, with a single pace being either left-right-left=1 or right-left-right=1. In general, an adult takes 18 to 20 paces per 100 feet, or 1,000 paces per mile over "average" terrain. Go downhill, and pace will lengthen. Uphill and pace will shorten. Of course, as Art explained, there are errors to these things, but those errors can be reigned in by using other techniques and information on the map.

One instance where it would be helpful to have some kind of distance estimate would be when traveling across fairly flat (featureless) terrain in the dark and the falling snow. In a scenario like that, it would be a good idea to have some indication of how far you've travelled in the event that the GPS you have with you were to malfunction. Some people prefer to use time to judge distance, but you do have to account for any stops and know your average speed. To keep track of distance by pacing, you can always keep ranger beads on a string or compass lanyard perhaps, moving one per 100 feet, or you can pick up a pebble per 100 feet. Something to that effect.

Anyhow, that's a little of what went on in today's classroom session, along with discussion about map reading, celestial navigation and techniques for using terrain to one's advantage. This evening, the class will go out to the field to practice, taking turns using alt. nav. skills to move from point to point, partly in the daylight and then extending past dark.

Also, on other "in the news" notes, here are some links to articles about folks who are still missing and some who've finally been found:

Backpacking Light Editor Missing After A.T. Hike (An ongoing search in Virginia along the Appalachian Trail)

And this is a REAL old one: A Mystery of the West is Solved (Remains of Everett Ruess found!)