Missing at The Wave

I'm leaning over the steering wheel, fighting the sleepies, while my teammate snoozes in the passenger seat. (Looks like he's going to have a stiff neck when he wakes up.) But no, I'm not scribbling with one hand while driving with the other; I'm composing a blog post in my head to help me stay awake.

Let's see, I haven't slept in (calculating...) about 30 hours, and we've still got a few hours left to go before we get back to Flagstaff. I probably should pull over somewhere and do a wake-up jig.

Anyway, last night -- or was it the day before? No, it was last night. So I had just finished watching a movie -- can't even remember which one right now -- and crawled into bed when the text message came in: "Missing hiker at The Wave, near the Utah border. Respond to the SAR building to depart at 1am."

A minute or so later, the voice mail came through. By then, I'd decided to go, so I called in and left my "Number 6-2-0, Deb Lauman responding" message. Turned out that just two other team members responded to the call-out, one of whom is not really a hiker anymore. But he did come along to accompany our Coordinator in his vehicle and help him drive and assist with Incident Command. No one else responded after the second and third call-outs.

So northward the four of us went in our two vehicles, with Dennis and me in the pick-up full of tech gear, just in case. (We take technical rescue equipment and the Stokes litter on all missions.) It was still dark when we turned onto House Rock Valley Rd. and bumped our way along to the trailhead for The Wave and Buckskin Gulch (the world's longest slot canyon). I'd been there before, a couple of years ago. Dennis had been there several years before that.

Okay, I admit it; I did nod off a bit on the ride up, since I was the passenger.

Anyhow ... the missing hiker we were looking for was a 70-year-old man -- a geologist who must have been in heaven in this natural wonder of an area when he told his three companions he was going from The Wave over to the nearby Wave II formation and would be back in 15 minutes. Four hours later, apparently, his friends decided to go look for him. That was yesterday afternoon.

So, here's a picture of the Wave II. Pretty cool, huh? 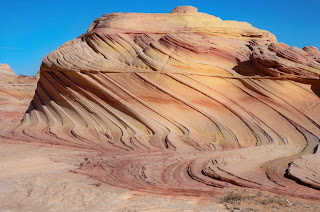 We were given a description of what the man was wearing (which turned out to be incorrect, actually), and, as the sun was beginning to peek over the horizon, the two of us searchers started off down the wash for the three-mile hike to The Wave and the subject's "last known point" (LKP).

We were searching and calling along the way, of course, and we detoured a bit to a slot canyon, where we actually made voice contact with a man we couldn't see.

And that was it. He didn't answer us again. Hmm. Might have been someone (or two people maybe, because he had said "we") out there without the required permit. Maybe that's why he'd been reluctant to talk to us.

And onward Dennis and I went, climbing up and over and around rock formations and trudging across sand. It had quickly gone from very chilly to very hot, and I made a big dent in my water supply early on. 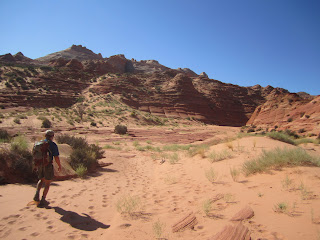 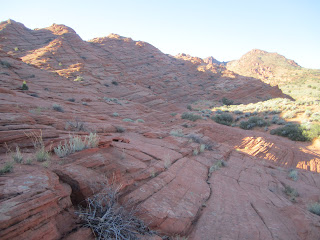 When we got close to The Wave, at the base of the sand dune we'd have to climb to get up there, we decided to first search a slot canyon to the west of The Wave and below the Wave II. We figured that the likelihood of the missing hiker actually being at either formation was slim, given that there were already other people at those locations who'd have run into him. (We'd seen them along the route and talked to a few of them.) We also wondered if perhaps the subject had fallen into the canyon we were about to search, since there certainly are fall hazards. So we turned west and entered the narrow canyon to search from below.

Here's a glimpse of that canyon. The Wave II was way up above, to the left... 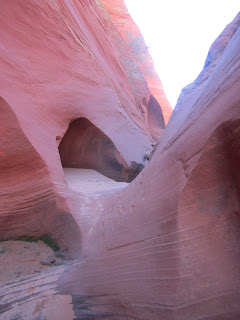 In the meantime, a fixed-wing aircraft, flown by the Kane County, UT, SAR Coordinator was searching high overhead. And then a DPS helicopter arrived to fly lower than the plane. We heard the rotors nearby as we made our way further into the canyon.

Eventually, Dennis and I got cliffed-out in the canyon and it was too sketchy to go up and around to the side in order to continue on. So we decided to go back out to that sand dune below The Wave, ascend and head over to the Wave II, and then try to get back down into the slot canyon from above, bypassing the obstacle we'd run into. Dennis had done that before, years ago, and he recalled that there was a way to do it safely.

But we didn't quite get that far. After trudging up the sandy incline and across the slickrock "shelf," then down to where we could see our re-entry into the slot canyon, we heard through the static on our radios that the subject had been located by the helicopter crew, and they'd soon be landing to pick him up.

Turns out, the missing hiker was up, not down -- that somehow he'd scrambled to the top of the mesa above The Wave and was perhaps stuck up there. I really don't know exactly how he ended up where he did, when the Wave II is so easy to find when coming from The Wave. (Must have gone walk-about to explore some more and then gotten himself misplaced.) In any case, he was in good shape -- in part thanks to water pockets he'd been able to drink from -- and good spirits, as were his three friends when hot and tired Dennis and I arrived back at base.

And now I'm really looking forward to a hot shower. The soft bed will have to wait awhile, though, because as tired as I am, I can never seem to sleep in the middle of the day. I'll just be glad to get out of this truck. 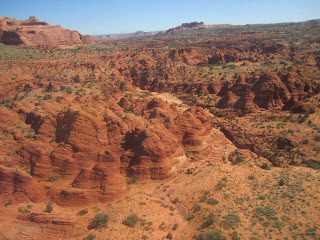 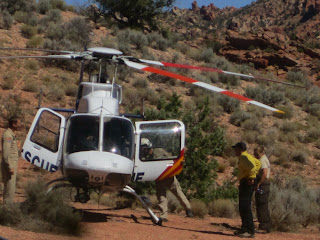 Email ThisBlogThis!Share to TwitterShare to FacebookShare to Pinterest
Labels: Missing Person, Other Search