Welcoming New Team Members and Saying Goodbye to Another

The Search & Rescue Academy is underway, with 18 new members taking classes in skills such as Personal Safety, Map and Compass, GPS navigation, ATV operation, and Tracking, with a mock search to be held at the end of the two-month training.  Once students have completed the Academy, including two  Incident Command System tests, they'll be added to the call-out list and be eligible to respond to missions.

Sadly, as we welcome new members to the Coconino County Sheriff's Search and Rescue team, we're also mourning the loss of another -- a four-legged team member named Nitro. Nitro, whose nickname was Peedles, was the oldest and most experienced of handler Cindy McArthur's four SAR dogs, and he did his job enthusiastically and with energy till the day before he suddenly succumbed to previously undetected liver cancer earlier this month. Nitro was ten years old. 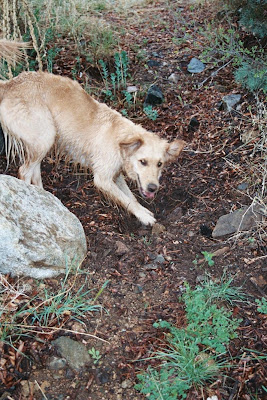 A NASAR-certified search dog cross-trained in area search (for live subjects) and HRD (Human Remains Detection), Nitro had three live finds and three HR finds on missions during his career and countless other successful finds during trainings as much as three times per week.

Among his mission finds were an autistic teen, an 83 year-old man with dementia who'd been missing more than 40 hours, the verified location of the scent of human remains in a closet three years after the body had been removed, which led to the killer's arrest, and the location of 8 human bones buried in a pack rat nest. Earlier this year, Nitro located two lost hikers in the San Francisco Peaks and also found a smear of blood on a pair of pants inside a locked trunk, later determined to be human blood through the use of Luminal by the Coconino Sheriff's Office CSI Team.

Nitro received the Search & Rescue Dog of the Year award in 2005 from the Association of Pet Dog Trainers and, in the same year, the Kingman Police Department Excellence Award for assistance in a homicide case (which he shared with Radar, another of Cindy's search dogs). Nitro also received the Good Gun Foundation Award for Search Dog Unit in 2007.

As Cindy said, "[Nitro] was the best SAR dog any handler could dream for, and I will miss him dearly.  Our SAR unit has lost one of it's most dedicated members."

Having worked with Nitro as Cindy's backer and also as a lost subject for her dogs, I too will miss sweet, loyal Nitro.


******
The Search and Rescue community recently lost another member of its family -- DPS helicopter pilot, Matthew Uhl, who was killed in a car accident on September 20th when the vehicle he was driving was struck head-on by a Ford Explorer moving at a high rate of speed as the driver may have been attempting to pass other vehicles. Matthew Uhl was deceased on scene.

Uhl, a DPS Pilot since 2006, operated the Bell 407 Ranger Air Rescue and was assigned to the DPS Central Air Rescue Unit in Phoenix. At the time of his death, he was en route to cover a shift in Kingman as part of the DPS Western Air Rescue.

On February 20, 2010, Matt Uhl and DPS Officer/Paramedic Eric Tarr rescued 3-year-old Victoria Bensch who had been missing for nearly 15 hours after she wandered away from her Cordes Lakes home.

Uhl was also the pilot who flew the short-haul rescue of the severely injured canyoneer in Insomnia Canyon on August 13th that our team participated in. He will be sorely missed.

My hat is off to Nitro and Cindy.

Not only was he loved, he left a legacy.

I also bend a knee to Matthew Uhl and his family.

Your 18 nw members who are undertaking the Academy represent the future, while Nitro and Matthew represent the bar they have to reach.

Blessing to you all.

My deepest welcome to all who are new, and my even deeper condolences on the loss of all. Cindy and Nitro were an amazing team, and an inspiration to all who knew them.

I never met Matthew Uhl, but my prayers are sent to him and his family.

Thank you for all you do, so that others may live.

My deepest sympathies to Cindy and your unit for the loss of Nitro and to the DPS Air Rescue Family. I worked with cindy and Nitro when they where down here in Yavapai Co. and only had the privilege to meet officer Uhl on the Bensch search. On a happier note welcome to your 18 new members.