Today a cold shower felt REALLY good. By the time I got back from my 3-hour walk, I was drenched. Sweat, not rain. But the monsoon has got to be close, because I don't think the air has been quite this thick since I arrived. I've learned to give in to the heat and humidity, though, and not try to fight it--to just let the sweat drip and ignore it--which has made it easier to tolerate.

What a great walk, though! So peaceful. I headed out the way I've been running, but I saw so much more at a slower pace. All kinds of flowers. People working in their rice paddies. A bunch of chicks running down the river rock road after their mother. A baby sitting alone on a porch, petting a little goat, and an old, wrinkly man snoozing under a banana tree. The road led further away from town, but there were farmhouses along most of the way. I took a load of photos. 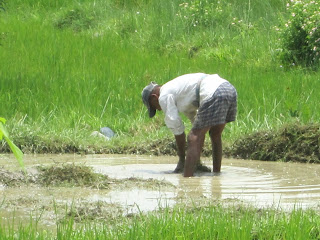 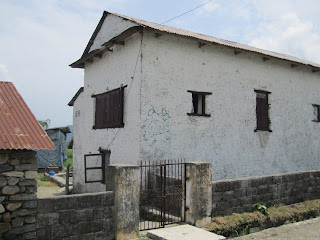 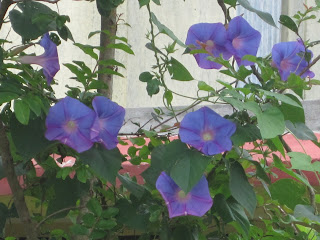 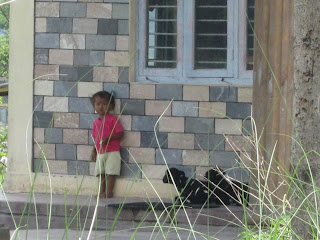 And this time, I walked with an umbrella because, cloudy or not, the sun is still intense. I got fewer stares than I usually do, since I looked a little more normal, I guess, carrying sun protection like the locals. Although people still clearly thought it odd that I was out walking with no particular destination or purpose in the hottest part of the day. I heard, "Whatchoo doing? Where you going?" from several people sitting in the shade. "Oh, just walking" was apparently pretty funny.

So, another thing I saw on my walk today--something I see everyday here actually, since it's across from the house--is a government school. Children wear uniforms at all schools, public and private. They're made to line up and chant and perform sort of a militaristic ritual in the schoolyard every morning. High caste don't mix with low caste, and most low caste children never go to school anyway. Physical punishment in the schools, while officially against the law on paper now, is still common, I'm told, and the law is usually unenforced. I read that well over half the children in Nepal are illiterate and never get an education. 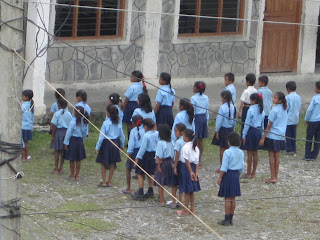 I'm sure I've written about the school Ingo founded at Shyauli Bazaar, at the rescue squad's base in the jungle. At first, it was intended for children of the rescue workers. But then it expanded when children from area villages were brought in as well, including a higher caste (Brahmin) boy whose father had traded his son in exchange for fulfillment of a debt, and the boy worked as a slave. (I met him in Kathmandu. He's about 25 now, I think, and attends the university.) All of the children from the Riverside school have gone on to higher education, becoming doctors and nurses, teachers, accountants, artists, etc.--children who otherwise would not have had an education.

At the Riverside School, no physical punishment was allowed, and the policy was strictly enforced. The children didn't wear uniforms. There was no caste system, meaning the "untouchables" sat beside, played with, and roomed with the higher caste children. They were not made to stand in lines and chant. They played games and sports. Ingo says children learn better and faster when they're happy.

There aren't any students in Shyauli Bazaar now because of the war. The war is over, but it's had a lasting impact in a number of ways. Ingo had to hide the older students during the war, because the Maoists would force them to join their army or kill them if they refused. They did kill a 14 year-old boy, the son of a man I met when we visited the compound.

Well, I hate to end on a down note, so here's a little something to hopefully make you smile. This is a video just posted on the HRDSN YouTube channel, showing some of their SAR dogs practicing their skills....

"These Nepalese SAR dogs and their junior handlers need sponsors for at least 1 more year of specialized training to be fully fit for all sorts of search & rescue missions. Nepal is a disaster prone country. Annually out here occur many large landslides and floods during the long rain season and thousands of remote villagers need our help.

Nepal is also a hot spot for earthquakes and a large earthquake is already long overdue here if one studies the records of the country's earthquake history that give the clear indication that a huge one is happening at intervals of 60 to 70 years. This is due to the sub-continental Indian plate shift, gradually moving northward in the direction of the Tibetan plateau, raising the Himalayas upward and altering the landscape of Nepal in a dramatic way once in a lifetime of every Nepalese.

What one sees in this video clip is practicing for earthquake victim search, negotiating difficult terrain and moving rubble. Its' just the beginning. More training has to be made at all sorts of locations--collapsed buildings, large landslides, etc.

Those who want to sponsor a particular dog and its handler in this video clip please feel free to contact me for details. Youth Clubs, dog food and pet-store companies, private individuals, school classes--everyone is welcome to adopt a dog and its handler for a long-lasting relationship and many exciting pen pal exchanges, training reports etc. Transparent audit of use of the given donations will be provided regularly by us."