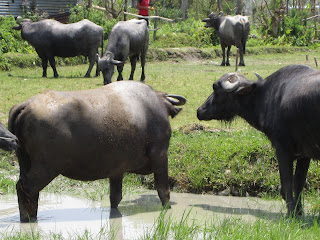 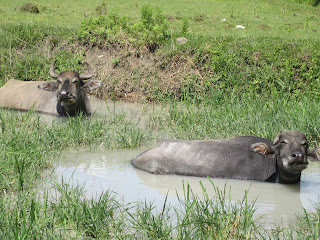 And aside from "meeto," which means "tasty," and "ali, ali," meaning "a little bit" (as in, food, because I don't want to be given more than I can eat), that's still the only Nepali I really know. I ask how to say something, repeat it (badly) several times to the delight of those listening, and then promptly forget what I've learned. I guess I just don't have a very good ear for language.

Anyhow, on my morning run today, I was surprised to round the bend on my usual route and find that a stone building that had been intact, roughly speaking, just yesterday had partially collapsed. Here's a photo of what it looked like before: 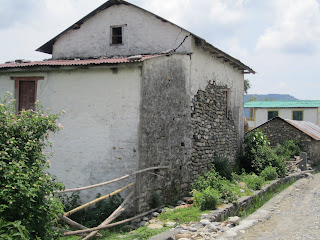 Obviously, it hadn't been in the best condition and appears to have been previously repaired. I'm wondering, then, if a rather far-off, magnitude 5.1 earthquake on the Nepal-India border yesterday was enough to bring the weakest part of this building down. 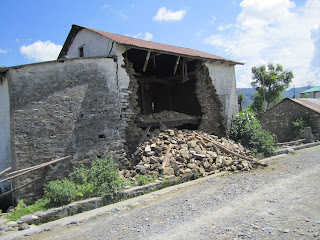 And here's another recent photo, for those of you who haven't already seen it on Facebook. This was taken from the taxi as I was leaving Lakeside after an afternoon spent wandering amongst the shops and along the shore of the lake and treating myself to lunch at the garden restaurant, Boomerang. 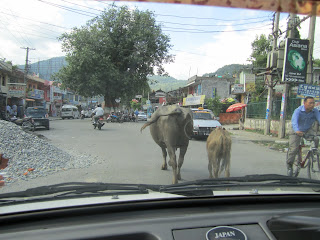 It took a few minutes, actually, to pass these ... um, ladies, I believe ... because every time the taxi driver shifted direction, so did they. Even he, the same driver who had been so stoic on the earlier ride out, couldn't help but crack a smile. He tried his rather obnoxious horn several times, but the girls didn't seem to bat an eyelash or flick a tail.

Anyhow, aside from a random visit to town, these hot, humid days have taken on somewhat of a routine here on the edge of Pokhara. I usually start out with my very early morning run (and the people along the way seem to have gotten used to seeing me out there, doing such an odd thing in my short American shorts and now say "Hello!" and "Namaste!" instead of "Whatchoo doing? Why you running? Where you going?"), then come back to the house and let the sweat dry while waiting for my shot at the bathroom for a cool to cold shower (which I've somewhat gotten used to). Then it's brunch a la Jith or Ingo and usually with Ingo. Then on to some reading and an attempt to catch up on email and news from around the world. In the afternoon, I often walk down a new or familiar unpaved or paved but deeply rutted street, do some work on the book project (of course!), then more reading, and eventually dinner, which often happens after 8pm.

Oh, and I finally received an email from Will, my photographer friend from Flagstaff. I'd been wondering whether he was actually coming to Nepal after all, since I'd heard very little from him since I got here. But he now tells me his plane leaves the U.S. on June 28th. So I guess I'll be seeing him here in Pokhara sometime around July 1st. Or I would assume so. He didn't happen to give me any further information beyond the date of his departure. Anyhow, it'll be fun to have a friend from home to do some further exploring with and possibly return to Shyuali Bazaar.

Well, that really is the extent of my news from Nepal. For now! And I'll leave you this time with another photo,  taken a few days ago on a rare summer morning when the Himalaya decided to come out of hiding. This view lasted maybe half an hour, before the mountains once again did their disappearing act: 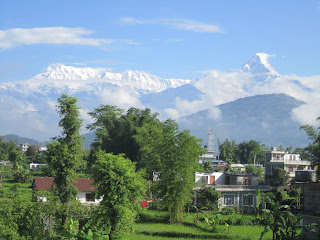