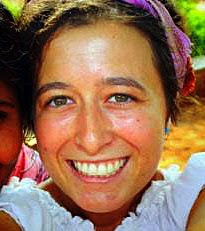 I DO hope it's Aubrey Sacco from Colorado (pictured here) who was seen at Nagarkot earlier today. It does kind of fit the M.O.--a girl alone, apparently getting on a bus, headed to the airport. Ingo has already included me with the K9 team if we need to deploy, but, right now, we're on standby pending confirmation that the sighting was indeed Aubrey. We should know in about an hour.

Aubrey has failed to contact her family since April 20th,  after a planned trek in the Himalayas. She began the trek at Syabrubesi and planned to follow the Lonely Planet hiking guide through the Langtang National Park.

News of the possible sighting came just as the dog team was about to leave their base at Shyauli Bazaar. It would be half a day getting here to Pokhara. Then, me included, we would go to Kathmandu (not sure if by plane or bus). Then we'd go to the mountains where Aubrey was last seen or at least last believed to have been. Right now, there's a lot of correspondence going on between Ingo and the family and Ingo and parties here in Nepal and abroad.

But even if this search is called off, it's been really interesting to watch (and read) how things are mobilized here.

So I'm sitting here in my room, happy the power is on (for now). The breeze from the ceiling fan really makes a difference. Earlier today, I was sweating my way around Lakeside, doing my bit for the Nepali economy. Things are really cheap compared to the U.S., but this country has brought out the buyer in me--something I don't do a heck of a lot of back home, especially when it comes to clothing. Today, though, I had some fun and got rid of quite a few rupees and way too easily I might add.

Well, we'll see how much money I have left near the end of my trip and THEN maybe I'll spend more on fun stuff. The clothes and fabrics are so cool.

Speaking of clothing, most foreigners I see ... well, all I've seen so far actually ... kind of have the hippie look. That is, anywhere from "kind of" to all-out hippie-dom, with dreadlocks, the mismatched clothing in all sorts of patterns and prints, and sometimes the dirty bare feet. So I did stick out like a sore thumb, wearing your basic, regular cotton t-shirt and the upper half of my convertible pants, which show more leg (about two inches above the knee) than what anyone else was wearing. Oh, and I had on wool socks and trail runners, while all other feet I saw were clad in sandals if they were wearing anything. So I made some purchases and NOW I can go back to Lakeside and blend a little more.

"Hippie" has never been a word you could apply to Deb Lauman (although, in this heat and humidity, my curly hair approaches dreadlock-ish on a daily basis, even though I shower and brush it out), but now you could say that I've gone Nepali casual. I had fun trying on my new duds back here at the HRDSN house, while waiting for futher news on the Aubrey Sacco search.

Anyhow, I wanted to answer several questions sent to me by Jayne. She suggested I answer them publically in case anyone else was wondering. So here goes...

Q: Where is Ingo from? He doesn't look Napalese.

A: Ingo is Dutch. His last name--Schnabel--is pronounced Shnah-bel, with the "a" like "ah." And when he says it, he draws the "ah" out a bit. Shnahhhbel. 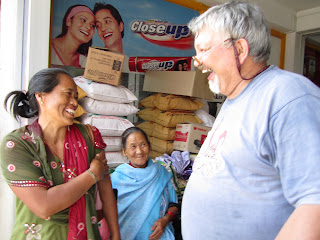 Q: Is most of the country Hindu?

A: Yep. Buddhism is apparently a distant second, so I've read. And there are also much smaller percentages of Muslims, Christians, and other religions as well. (Not to mention something like 40 native languages spoken.) But I understand there are some similarities between Hinduism and Buddhism, and I've met people who say they're a combination of both. I believe (all? most?) Hindus don't eat meat. Buddhists do, which is clear here in the HRDSN house, where we've had pork or chicken with many meals.

Q: Is that [Hinduism] where the caste system in Nepal originates?

A: I don't think so, because the caste system includes people of other religions. I honestly don't know how it began but will look into that. I'd like to know myself. This caste system really is pronounced here, the extent of which kind of surprised me even though I'd read about it beforehand. But to see it in action is really something.

Q: I heard the kids talking in the background of your video and it sounded like they might be speaking English. Did I hear that correctly?

A: No, they were speaking Nepali; although the older children here in the HRDSN house do understand some English, and I think the younger kids know some words, because English is taught in the private schools from an early age. They're very shy about trying to speak English with me, though. One of the older boys did translate for Phulmaya, Jith's wife (who speaks no English), when she asked me if I wanted more rice, but I wasn't looking at her and didn't realize she was talking to me. "More rice?" he said quietly, lifting only his eyes when he looked at me. Then, after dinner, when I said "thank you" to Phulmaya, that same boy told her to say "You are welcome." She giggled and said, "Welcome."

Ingo does speak some Nepali of course, having been here more than 20 years. But he does have a little difficulty understanding sometimes it seems, and he says his Nepali isn't great. His native language is German, and I believe he used to speak some Russian--he recognised it at a restaurant in Lakeside, where there were Russians at another table--but he said he's lost it. I think he has, at one time or another, spoken other languages as well. Ingo often speaks to Jith and other Nepalis in English. They seem to understand him--his accent--much better than they understand me. I guess they're just used to it after all this time.

Well, I guess I'll go see if there's anything new on the Aubrey Sacco case. And I'll upload some more photos and video too. I'm just snappin' and shootin' away! Everywhere I look, there's something I want to capture. (You can find my videos here on Facebook, but I don't think you have to have a FB account to see them: http://www.facebook.com/pages/Himalaya-Rescue-Dog-Squad-Nepal-book-project/259782534461?v=app_2392950137. Each one is taking me at least 2 hours to upload.)

A little later: It appears Aubrey Sacco has missed her plane, and there has been no confirmation that it was her that was seen in Nargarkot. Ingo says that if that had been her who'd boarded a bus to Kathmandu from that location, she should have had time to make the plane.