I can't just sit around. I need to move and explore, no matter how steamy hot it is. If I don't get a good walk in each day, I'll go bonkers. Besides, I'm in Nepal; I have to get out and see what I can see.

So I left the house without a plan and started wandering. It was around noon, time for resting during the hottest part of the day. But I was fidgety. Phulmaya, Jith's wife, offered me an umbrella for the sun, but, foolishly perhaps, I declined. I rubbed some sunscreen on my already sweaty face and arms and went on my way.

Maybe my lack of an umbrella was one reason I was giggled at on the street--a silly foreign girl wandering aimlessly without protection from the sun. Occasionally, someone would call to me in English from a shaded porch and ask, "Where are you going?" I would shrug, point, and say, "I don't know, that way," and people watching would laugh some more. Boy, did I feel like a dork.

I saw a group of children and adults gathered around, watching something. So I went over to look, too. A man and woman were seated (well, squatting more like) under an umbrella at the side of the road, casting small metal sculptures. I enjoyed watching the process, and as I watched all eyes turned to watch me. I smiled, but no one smiled back. I said hello, but no one answered. I tried "Namaste," but nope. Nothin'. So I watched for a while longer then slipped away. I could feel eyes on my back as I left. Wow, that was kind of awkward. 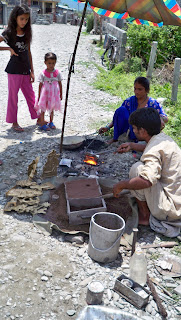 I passed small corn fields and rice paddies and hillocks of dried rice plants. I saw people sitting outside, bathing with cloths as they ladled water over themselves from barrels and buckets. Women washed dishes and clothing in the roadside ditches. Others walked with baskets on their backs. So, see, I wasn't the only one walking during the hottest part of the day ... but I suppose they were actually going somewhere. 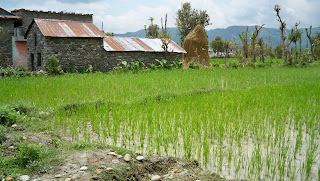 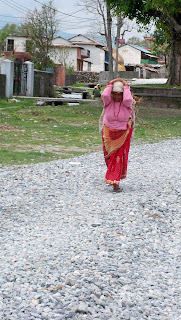 I passed some larger, gated homes—homes of the rich, Ingo later said--all taller than Pokhara’s two-story maximum, a law that’s apparently not being enforced, especially with all of the political turmoil that’s been going on in Nepal for so long. Who has time to pay attention to such things? Ingo says that higher than two stories is very dangerous, because a 6.5 earthquake will surely bring them down. And he says that Nepal is due for a big one. 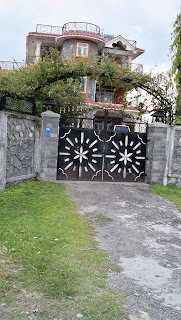 I stopped to photograph a pretty field and some simple and, in my view, quaint buildings with the foothills in the background. A woman called to me from the other side of the stone wall. “Namaste! Namaste!” Then she said something else in Nepali that of course I didn’t understand. So, silly me, I just nodded. 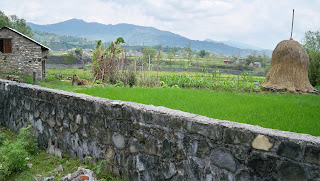 “Very pretty,” I said, gesturing towards the scene I’d photographed. “This is yours?” Kind of a dumb question, I thought, and figured she didn’t understand me anyway. But she continued talking. And I continued smiling and nodding. It was a funny, rather one-sided conversation.

Not knowing what else to do, I pointed to myself and said, “Deb.” Then I pointed to her. “Sada,” she said. Of course, she had to repeat it three times until my ear caught on. Amazing how difficult it is for me to understand even simple names. When I finally said it correctly, she smiled. Then she put two fingers to her lips, not like holding a cigarette but with the fingertips touching. Hmm. Several people had done that to me already. Sada then pointed towards her house. “You want me to come in?” I asked, unsure of what I was supposed to do. Sada smiled some more, then turned around and went inside. Um ... do I open the gate and follow her? I decided against it. Maybe she meant SHE was going in to eat.

Later, when I described the gesture, Ingo told me people were asking if I needed food or water. Wow ... cool. How nice. He also told me that the word I'd heard some children add after "namaste" was actually an insult. Oh. Apparently some of the higher caste Nepalis (like the Brahmins) aren't too fond of foreigners, and they teach this to their children.

Anyhow, what else did I see on my walk? Well, I saw people napping on their porches and others gathered, talking, in the shade. And I saw water buffalo, which pretty much have free reign unless they happen to be tethered. I saw two bulls doing the head-butting thing. 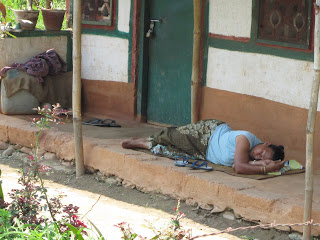 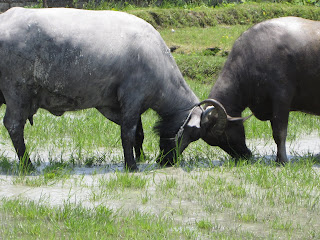 After about two hours of wandering, I arrived back at the house, also the temporary office of the HRDSN, which, by the way, is rented. (Ingo, Jith, Phulmaya and four boys--and currently me also--occupy the second and third floors. The owner and his wife are on the first floor. Soaked to the skin, I took off my sneakers, peeled off my socks, and went up to the third floor for a much-needed cold shower. Sometimes lack of hot water isn't an issue at all.

Okay, well, time to go see if Ingo is awake after his midday nap. If so, I need to bug him to continue with the HRDSN story. When you get him started, though ... boy, can he tell a story! 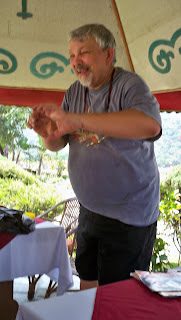