It's like learning a foreign language. At first, it's work, even a struggle. And if you don't keep reviewing over and over again, you can pretty much lose most everything you've gained within days. Then, eventually, you realize you don't have to work at it so much anymore--that you just get it and things make sense. And before you know it, you're fluent. That's basically what I hope will happen with these technical rescue skills I'm trying to master.

Master. Ha! That's difficult to imagine right now. But I'm trying as hard as I can to get the hang of these skills and to commit them to memory, both in my mind and my body. I want my legs and arms and hands and whatever other parts might be involved to execute the knots and the moves and set up the systems like it's all second-nature. But that's going to take time. And quite a lot of it.

I went away for two weeks recently on that trip to Colorado, and, when I got back and started to think about Rock Rescue Academy again, I was amazed to find how much I'd already forgotten. I was pretty ticked at myself, actually. And frustrated.

Then I went to a practice session one evening, where we learned something new--the "hot changeover" from ascending to rappelling, and I was even more frazzled. At least with my first attempt. I was on the rope, sweating and swearing (quietly) for about half an hour, hanging about ten feet off the ground in the SAR building, trying to get things figured out. At one point, a teammate even climbed up a ladder to give me some assistance.

After a break, though, practicing with the Rescue 8 rappel device and the release mechanism on the ascenders while on the ground, then lengthening my self-belaying Prusik which was way too short the first time, I went up for another try. And that time went much better AND much faster. But a teammate talked me through the whole process, so I'll have to practice, practice, practice that too if I'm ever to do it completely on my own ... while hanging off a cliff. Which will probably be soon, during our next official practice.

In the meantime, I've been getting together with new tech team members and an experienced member at the SAR building to go over things we've learned. This last time, I figured I'd take photos of the set-ups, which would hopefully help me remember how everything goes.

Here are some of those pictures:

This first one is a rescue rack loaded and tied off, ready for lowering. 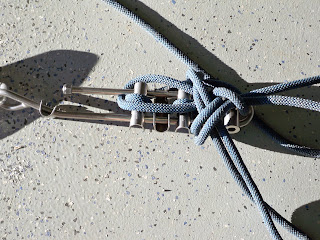 Here we're doing a "hot changeover" from a lowering system to a raising system, which is done while the "load" (ie. the attendant, patient and equipment) are on the rope, mid-face. The green webbing with a Prusik is temporarily holding the weight of the load as we attach pulleys and other equipment for a raise with a 3-to-1 mechanical advantage. (Ooh, don't I sound like I know what I'm talking about?) 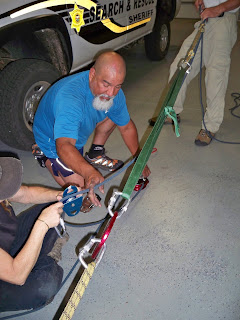 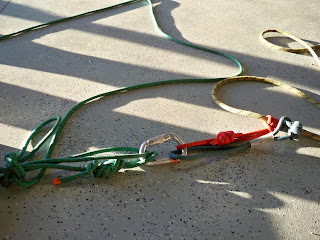 And this is a Meunter hitch, used with the load-releasing set-up. This hitch comes into play if the force of the load is transferred onto the belay line and the Prusiks (in the tandem Prusik belay) become locked. This might happen in a fall or if the belayer doesn't move quickly enough and keep up with the main line, maintaining slack on the belay. Without the load-releasing hitch, well, you'd basically be screwed or have to come up with some other way (which there probably is, I just don't know ... or don't know if I know it yet) to get those Prusiks unlocked. Under force, they're said to "melt" on the rope. 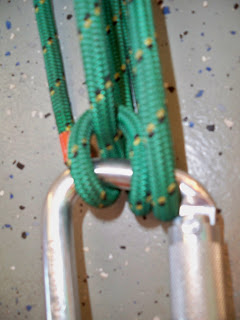 Anyhow, those are the sorts of photos I took, to help me go through the steps of setting up anchors, lowering and raising systems and belays in my head, as I lie awake at night, wondering if--or, rather, when--I'll get the hang of all this. That is, if my teammates have the patience to put up with me long enough.

Isn't it amazing how quickly those skills disappear? I haven't climbed in years. Last week I atempted to tie a simple bolan. I had to get the book. Knot fail!

Yes, scary how fast. Especially when you're just learning. (I just went into the other room and tied a bolan, since you mentioned it. Phew! I didn't forget that one ... yet.)

Deb,
I feel your pain. I was in a pararescue squadron (ground rescue teams) in the Air Force, and I think I forgot the technical rescue stuff seconds after I learned it! Didn't help that I was the commander and "big desk" guy, that's for sure.
Repetition, repetition, repetition. Do it so you no longer think about it.
Thanks for what you do up there from us down here in Tucson.
Matt