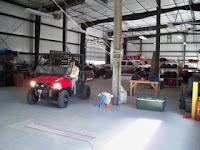 "What did he say?" I asked the paramedic sitting next to me, loud enough to be heard above the UTV's noisy engine. With that racket and my helmet on, I couldn't hear what a teammate perched on top of the litter on the back of the Polaris Ranger had just shouted.

**The Polaris Ranger UTV is the red machine pictured here. And we were headed up this mountain (although, there was no snow): 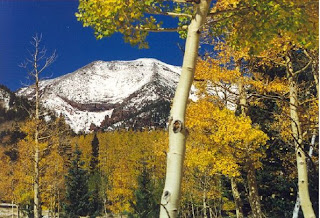 Must not like my driving, I figured. I had come rather close to that last big drop, I guess. But, really, there wasn't much room on the other side, either.

In the end, though, I didn't lose anybody off the machine, which is always a plus. I'd never driven the thing up that high on the mountain, so I was a little nervous on the first run, sitting forward on the seat, gripping the steering wheel with my sweating, gloved hands. But by the third time up and down to the spot called "Midway" on a grass and rock-covered ski slope at the Arizona Snowbowl, I had the drive down quite well. By then, I knew just where to point the vehicle to lessen the bumping and grinding (of rocks on metal below) and the possibility of tipping over.

What I was doing was shuttling SAR members, Guardian medics and equipment, including a break-apart litter, webbing and rope, to the highest point we could get to by all-terrain vehicle, so they (and eventually I) could hike, steeply, off-trail to the saddle and possibly beyond. The patient was determined to be above treeline, though the initial information had placed him close to the bottom. Big difference there.

He had strained or sprained (not broken, I don't believe) his ankle. Apparently, he'd done some hobbling, but there was no way he was going to make it from the ridge about 4 miles down to the lodge on the Humphreys Trail. So we were headed up to carry him down in the litter. It would certainly take hours.

But then the helicopter was in the air. To my surprise, the pilot was able to set down at the saddle after the landing zone was cleared of hikers by ... someone ... and the patient was brought aboard. In a way, that was a relief to us, the ground crew, but at the same time, there's risk to a helicopter rescue. But those in charge know what they're doing and weighed the pros and cons to both the rescuers on the ground and those in the air and made the decision to go with the helicopter.

Search & Rescue volunteers and paramedics on the ground continued carrying out our assignment until we were told to do otherwise. You just don't know if things will change and we'll be needed after all, until the patient is aboard the helicopter and on the way to the "LZ" near the waiting ambulance. Once that was accomplished, though, our incident commander got on the radio and told the paramedic I'd shuttled to Midway, already on her way up to the saddle with a few of my teammates, to return to the drop-off point for pickup and me to turn around to get her. I was already close to the bottom where I'd been going to shuttle more personnel.

So back up I went, picked up the paramedic and had her back down at the lower LZ JUST as the patient was being carried from the helicopter to the waiting ambulance the paramedic had come from. That meant the ambulance didn't have to wait for her. What timing! (I'm good.)

Then I went BACK up the mountain again to retrieve my teammates, who'd been told to hold their position a bit longer, I guess. (It was hard to hear the radio traffic over that UTV noise and through the helmet, and I had no one to translate for me while I was driving alone.)

"Watch that big drop on the right," my SAR-mate advised on the way back down. He was the one I didn't hear on the first trip up. I considered giving him a few (more) gray hairs but decided to give him a break. :)