A Lot Of SAR Lately

Between the extra technical rescue practices and two missions, it's been pretty constant SAR activity for me for the past few days. But that's okay; I really do enjoy it ... if you hadn't already noticed.

So there was the call-out on ... what day was it? Sunday? Yeah, at about 8:30a.m. I was dressed for Jazzercise and quickly changed into my nylon, convertible pants and SAR tee that I prefer to wear in the summer instead of my long-sleeved uniform shirt. I switched from aerobics sneakers to hiking shoes just before heading out the door. But there was no hiking to be done this time. Just lots of driving. And, for a change, I was behind the wheel instead of co-piloting.

We were searching for two men who'd rolled a jeep the day before and, with at least one of them injured (a possible broken arm), they'd called a family member and given some sketchy information about their location before the cellphone had gone kaput. The son of one of the men had spent the night driving unpaved roads, many of them not on the map in a very sparsely populated area around Ashfork, Arizona, consisting mostly of ranch land, but he had no luck locating the men or the overturned vehicle.

Given the ambiguous information we received, our search area started out rather large. A subsequent cell phone ping from the last call gave us a vector (if that's the right term--or wedge, I guess), narrowing the search area some. With Ranger--the helicopter--in the air, those of us on the ground relocated and spread out as the information changed.

Ultimately, one of our field teams came across the men, hobbling along near a cattle tank. Ranger landed and administered some initial medical care, then the victims chose to ride in a private family vehicle to the hospital, rather than accept transport by ambulance.

For me, driving for hours is much more tiring than hiking for hours, so I was glad to get out of the vehicle and shake off the sleepies back at the SAR building later that day, as we waited for word about a second possible mission. But that one was resolved before we went into the field again. 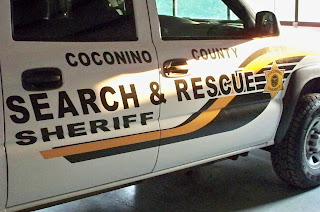 The next day, as I was doing some work on the computer and listening to the Sheriff's scanner online before heading out for more tech practice (I'm getting the hang of some of this stuff, by George!), I overheard the initial stages of some SAR activity and knew there was a good chance of a call-out.

Ranger was in the air with one of our SAR coordinators, looking for six overdue hikers in West Fork Canyon. I called a teammate, who was to meet me for practice, and gave him a heads-up. We proceeded with our plan and went the building to work on anchors, belay and pick-off set-ups and all that good stuff, only to be called minutes later about the mission. So we headed right over to the coordinator's office--a short walk from the SAR building to the main law enforcement complex--for a briefing.

For a while there, it looked like four of us were going to be inserted by helicopter into the canyon. They'd spotted three people believed to be from the party of six, and they'd been waving their arms at Ranger. But whether they were in distress or not was unknown. What was known was that they were already a day overdue, one of the women was 3 months pregnant and one of the men was allergic to bees and had no Epipen, so said the reporting party, a couple who had left the group the day before and hiked out the way they'd gone in.

As I understand it, the group's original plan was to thru-hike the canyon from bottom to top, so they'd done a shuttle and left vehicles at both ends. But the other six didn't show up at the top, and the two hikers who'd come out early became concerned.

While we were in the coordinator's office, he put the reporting party on speaker phone so we could hear the information firsthand. Then we headed back to the SAR building to get our gear ready so we could go over to the airport to meet Ranger.

Then a plan was carried out that changed our mission from a possible all-nighter to an early morning hike. A radio was lowered from the helicopter to the three people in the canyon, along with instructions on how to use it. Ranger was then able to talk to the hikers and find out the situation, including the fact that they were tired but generally fine. Three of the six had gone ahead to hike out with their four dogs, while the other half of the group, including the pregnant woman and the man allergic to bees, stayed behind, too exhausted and not fast enough to make the rest of the distance that night.

So three of us SAR folks volunteered to meet at 4am and hike in at first light to locate the three remaining hikers, make sure they were still okay and hike out with them. Then we resumed tech practice for the rest of the evening. 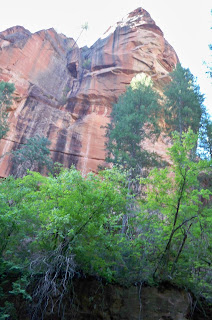 My alarm went off far too soon at 3a.m. But I never mind a walk up West Fork. It's really neat to be in there at dawn, when the birds start singing along with the sound of the creek, and the red canyon walls are illuminated by the rising sun.

Oh, sorry, I started to slip into waxing poetic-mode there.

So anyhow, as we hiked, we periodically tried to contact the hikers on the radio, unsure if they'd left it on all night or not, or if they were still asleep or had started walking towards us. At one point, when we'd gone about five miles, we started to wonder if perhaps we'd missed them somehow and passed one another. It would have been unlikely but possible. We got no response to our repeated, loud whistle blasts either.

But just as we began hiking back to re-check the parking lot, where their car had been when we'd started out, I heard static on my radio. I called again, "West Fork, party of three, this is Search & Rescue. Do you copy?" After more static, I heard a reply. At 7:15, they were just waking up and getting ready to hike. And they were still all fine. 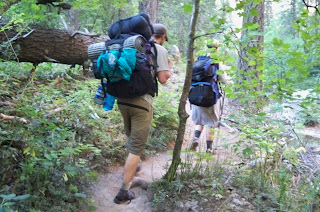 In a short time, the three of them and the three of us were together and, after a brief conversation about what had happened--they'd taken a wrong turn and gone up Casner Cabin Draw instead of continuing in West Fork--we turned back towards the parking lot. The weary and appreciative hikers were happy to be on trail again after all their bush-whacking, wading and swimming.

So all ended well, and by noon, still in my SAR clothes, I was asleep on the couch with my cell phone on the coffee table, just in case something else SAR came up.

Email ThisBlogThis!Share to TwitterShare to FacebookShare to Pinterest
Labels: Other Search

Deb my name is chris wells and you have inspired me to join my locale sar team. I first heard of you through b-packer and that is where it began. I truly thank you so much, because you gave my love of the outdoors more meaning. It took me a minute to find you again but i wanted to tell you that through your inspiration i have completed my first NIMS test and happily moving forword. On November 6-8 i am attending INKY SAR. And am planning to drop you name about the 24 hour pack. It really is a great deal! Thanks so much, Indyc!

And, hey, Chris! I don't know if you'll see my response here, but thank you so much for telling me this. That's awesome! I'll have to look up INKY SAR and see where that is. I wish you the best with Search & Rescue and hope you'll keep in touch and let me know how it goes. To me, SAR is one of the most satisfying things I've ever done, and I hope it'll be the same for you. Your comment made my day. :)