Yesterday, I included a link to an article about Ken Knight, editor of Backpacking Light Magazine, who was missing after going for a multi-day trek on the Appalachian Trail. Today, he was found alive and in good health after getting lost and starting a signal fire ... which got a wee bit out of hand. You can read more, and see a photo of Ken as he's being taken to a hospital to be checked out, on NewsAdvance.com out of Lynchburg, Virginia.

On the sad side of the day's SAR news--this story much closer to home--one of the three young people who were carried away by the swift Colorado River current in Grand Canyon was found deceased, and the other two are still missing. Here's the latest article from the Arizona Daily Sun: One Of Three Swept Away In Colorado Found Dead.

As far as our Nav. Boot Camp goes, today was Map & Compass day. I sat in on the classroom session, helping students now and then and refreshing my own skills at the same time, but was excused from the field work since we had more than enough instructors. Tomorrow is the GPS class, a full day for me. So tonight I'd better get some sleep. I had a heck of a time keeping my eyes open sitting in the classroom after just five hours of sleep last night. I spend way too much time on this computer. 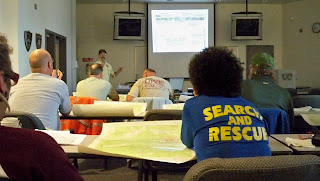