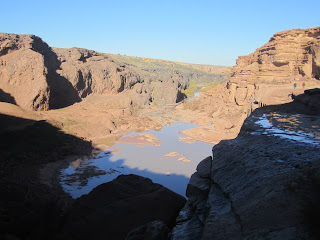 With my left set of fingertips gripping a tiny, sharp ridge of (hopefully) embedded volcanic rock above me, my left foot perched on a small piece of (hopefully) embedded rock below, and my free hand and foot groping for something solid, I tentatively glanced down over my left shoulder. I decided there was no way I could safely go back the way I'd just come up, and I was doubtful about moving on. The steep wall of the canyon was covered in loose cinder, and I couldn't know for sure if the pieces of rock I wasn't quite able to reach were loose or solidly attached. Judge incorrectly or make a wrong move, and I was going for a fast ride down that cinder slide and over that ledge down there. That's what I was envisioning, anyway.

Crap. Not the kind of pickle I like to find myself in. And my two more confident teammates knew it. Every other word of mine was a bad one at that point.

So, you see, we'd completed our assignment, having been inserted into the Little Colorado River gorge by helicopter several hours earlier, exiting the DPS aircraft as the rotors continued to spin and kick up sand. We'd searched the far side of the river, which was flowing pretty well at the time, overlapping the point where another team had been inserted further upstream. We then forded the river at a wide, shallow (and slippery) area, and searched the opposite bank back the way we'd come. We'd been careful to look at piles of river debris from past flooding and kept an eye on the mud and shallow parts of the river for anything unusual that might be sticking out. We'd searched the shores, including small caves and crevices and vegetation that could potentially catch and hide human remains. 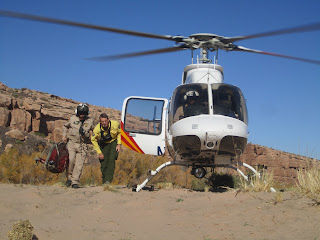 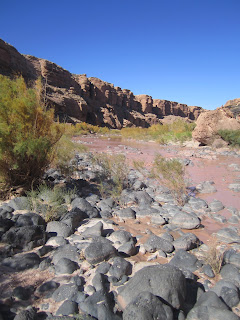 We were looking for any sign of 40-year-old Justin Brian Hall, an avid outdoorsman, former Appalachian Trail thru-hiker, and climber, who'd disappeared from a friend's home, where he'd been house-sitting in the very rural area near Sheba Crater and the border of the Navajo Reservation more than a month earlier. This was a continuation of the ongoing search, which had already extensively covered a one-mile radius around the house and well beyond, following up on tips and suggestions from locals and family and friends. Nothing at all had turned up that would indicate a destination or direction of travel.

This is the house where Justin had been staying.... 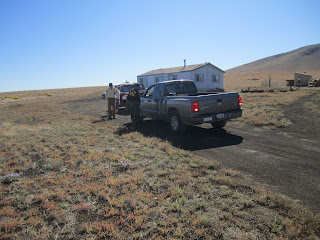 Now searching about 10 miles (as the crow flies) from Justin's last known location, where his vehicle and belongings remained, ground teams were covering several miles along the Little Colorado River. A K9 team, with myself as one of the backers, had already searched the area just below and partway up Grand Falls at an earlier date, but it was being searched again on this day. We were looking for not only human remains but possibly a couple of items believed to be in Justin's possession at the house but yet unaccounted for, as well as any type of clue or sign that could potentially be linked to him. We found nothing.

Here are a couple of photos from our earlier search at Grand Falls with the dogs.... 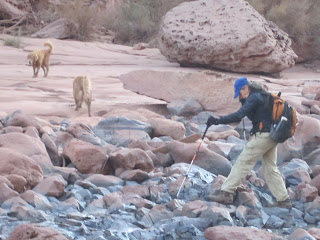 Today, by the time our field team of three returned to the place we'd been dropped off at the bottom of the canyon several miles downstream from Grand Falls, the DPS crew had been reassigned and left the area. So our options were to climb out on our own or ... yeah, that was about it. We could do that either somewhere near where we were, or turn around and hike all the way back to Grand Falls, where we knew there was a trail to the rim. Or perhaps find a good place to climb out along the way.

We chose to find a route near where we were, but, looking up, it was difficult to tell how it would go. For the most part, the climb turned out to be steep (obviously) and the rocks and sparse vegetation were sharp, but it was otherwise okay ... except for a couple of spots like the one I described above, where I was temporarily frozen. And stopping one's momentum in sketchy spots doesn't exactly help matters. I could feel myself slipping every second I stayed in place.

Thankfully, my teammates stationed themselves in spots below and above me that gave me just enough confidence to move from those precarious locations.  After anchoring himself as best he could, one of my companions offered me an outstretched wrist to reach for in case I needed it (which thankfully I didn't). My feet slipped as I practically threw myself across to the closest stable spot.

Eventually, the climb turned into a heart-pounding, steep scramble up a volcanic scree slope, but the scary stuff was over. Here's Keith at the top of the cinder slope.... 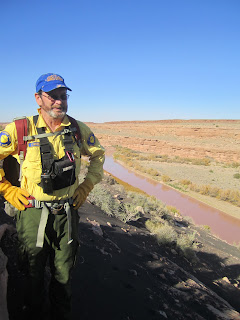 Once at the top, we began walking towards base as we waited for someone to reach us by vehicle for a ride back.

********
Since that day about two weeks or so ago, the team hasn't been called upon again to search for Justin, who is still missing and very much missed by his family, many of whom are back east.

And here are two photos of Grand Falls, the top one taken on the day I just described. It was running quite a bit more than it had been about 10 days earlier, when I'd gone there to search with the K9 team. The lower photo was taken during spring runoff a few years ago. When Justin Hall went missing in mid-September, the Little Colorado was flowing at a much higher level than it was in the upper photo but not as much as the lower.... 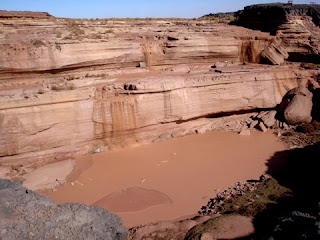 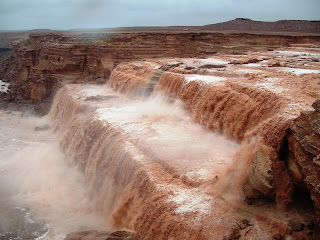 A Facebook page has been set up as well. See: Missing Justin HALL

I saw your story and then today saw the story of a body discovered in the Grand Canyon below Navajo Bridge near Lee's Ferry. There's quite a bit of distance between where you were at Grand Falls and Lee's Ferry, but I was wondering if these two are related. The article is at http://yosemitenews.info/forum/read.php?1,48886,48886#msg-48886. Both are in Cocinino County.

I actually just heard about that less than five minutes ago on NPR. (That's my wake-up alarm.) I wonder the same thing, but we'll have to wait and see. The report doesn't say the condition of the body, and Justin has been missing for about two months now. But you never know.

I am Justin's cousin in VA. Thanks you for your efforts!

Thanks for posting Deb. It is nice to be able to see pictures of where you searched. I sent the medical examiner Justin's dental records from when he was 23 years old, but they have requested more recent dental records because the deceased had more invasive dental work done. WE are now trying to find out another dentist he may have gone to. We really don't think this is my brother. He took great care of his teeth, and we just have a gut feeling that this isn't him. Thanks again for your search efforts and I will keep you posted.
Jenny Hall

I'm another cousin of Justin's in VA. I also thank you for your work.

Another Cousin here thanks for taking the time and effort to look for our family.