There are certain places within the county that our team is called to time and time again, and, over time, patterns begin to emerge. People tend to get into pickles often in the same places and under similar circumstances. So it's a good idea for those in Search and Rescue to familiarize themselves with these popular "people-in-pickles" spots, so when we're called upon to go find the lost and assist the injured, we know what we're getting into and where we're going.

I'd never hiked into West Fork Canyon from the top, so this training hike was a good opportunity for me to check it out. Four of us, led by assistant SAR Coordinator, Dave, who's very familiar with the area from many years of exploring by foot and flying over it as a helicopter medic, would hike and boulder in at least 2.5 miles to the junction of West Fork Canyon and Casner Cabin Draw, which is a place where hikers often go astray when thru-hiking West Fork from below. Many of those hikers don't carry maps and end up going up Casner Cabin Draw instead of West Fork. In Casner Cabin Draw, they come to a choke stone and can go no further. Then they're confused, tired, and darkness overtakes them in the rugged canyon. Eventually, they're reported overdue by a friend or family member when they fail to show up by the expected time (and often then some), and SAR is called.

In addition to familiarizing ourselves with the canyon, we had another job to do on this training mission: we'd be investigating an abandoned campsite that had been spotted first by air during an earlier mission and then briefly checked by two SAR volunteers who'd later hiked in that same night to locate five overdue hikers (with no connection to that campsite).

It was a warm morning, but I resisted the urge to zip off the bottom halves of my convertible pants because I knew the canyon would be thick with vegetation and there would be plenty of blowdowns to crawl under and over. And I was right. Had I been wearing just the shorts, I would have gotten even more scratched up.

The going was slow, not only because of the absence of trail, the countless opportunities to sprain or break an ankle, and the heat, but also because the canyon is so beautiful. We kept stopping to look around and appreciate how pretty it is.

As we hiked further, the canyon narrowed and the walls went higher. Wildflowers were blooming, hummingbirds were buzzing, and one pretty snake (non-poisonous) slithered past us after we disturbed its snooze in the shade of a rock. We saw bear scat but no bear. Dave told us about hiking this canyon with his dad, when he was a boy. He also told us how he and a friend carried out (without a litter, so literally carried) another friend who became seriously ill on their hike. 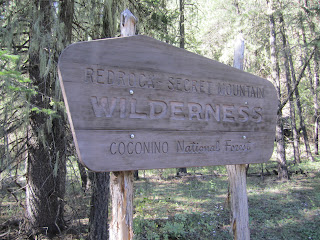 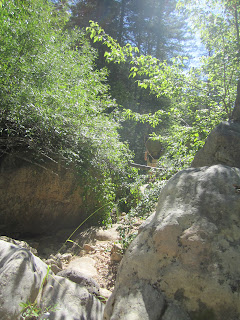 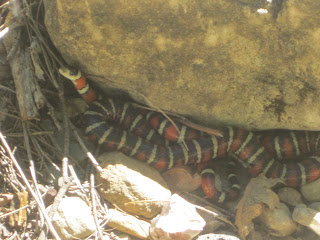 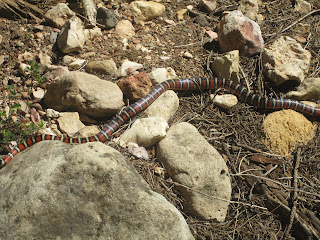 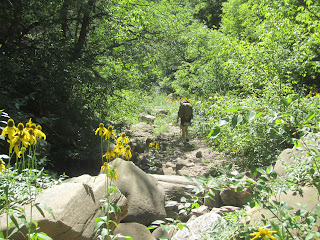 As we went, we'd periodically pause to guess where on our topographic maps we were. We'd all look around at the terrain and compare it to the contours on the map and point out our guesses to Dave, who'd guess as well. Then I'd map the coordinates from my GPS and see who'd come closest. It was a good exercise and a fun challenge. It was also fun to get it right!


After maneuvering our way through a section of large boulders, we came to the junction of the two canyons, also the location of the abandoned campsite. To me, it looked as if a party of perhaps as many as three people had decided, hey, let's try this backpacking thing, gone to Walmart and bought tents, sleeping pads and other not-so-pricy gear, some of which was more suited for car-camping than backpacking, and set off on their first overnight hike. Then, after struggling through that rugged canyon with all that STUFF on their backs, including some new clothes and new shoes, decided the next morning that all that shlepping wasn't as fun as they'd expected. So they took only the bare minimum for the hike out and left the rest. They'd left yucky garbage, deoderant and cologne behind, too. 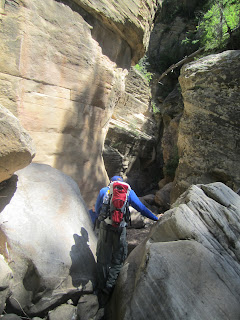 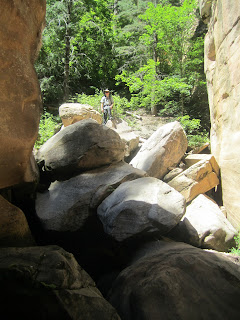 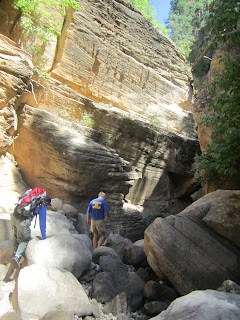 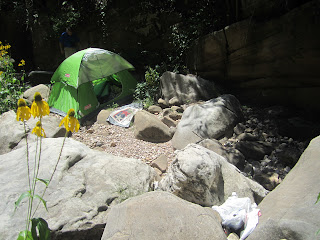 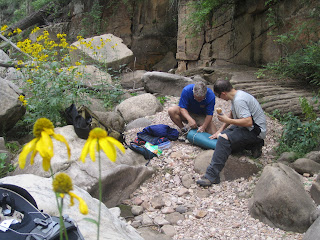 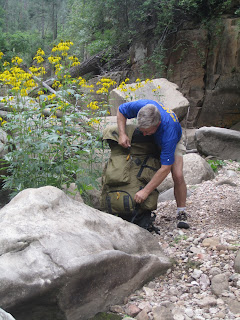 We packed out their trash, usable and not.

At that point, we considered whether or not to add about 2.5 more miles to our already 5-mile round-trip hike to go up Casner Cabin Draw to the choke stone. But the thunder was rumbling loudly by then, and it was already later than we'd anticipated, so we decided to head back.

It was a great day and a useful reconnaissance mission. The next time we get a call for overdue hikers in West Fork, I'll know more than just the first few easy miles from the bottom.

And in other Coconino County Search and Rescue news....

And I received a mission report from my teammate, who responded to the call for a litter evacuation of an injured hiker on the Humphreys Trail. He wrote:

"I left at 6:30 am this morning to get a backpacking permit at the Grand Canyon, then proceeded to do a 5 mile day hike on the Hermit trail. About 30 minutes after I got back, there was the callout for the Humphreys litter carry. I responded directly to Snow Bowl [with another team member], and we both were transported by the Snow Bowl UTV to the trailhead. By this time, [a second callout was made]. We arrived at the patient, and eight rescuers including a young hiker who volunteered to help, and Flag Fire and Guardian personnel 200 yards beyond the sign-in box. [The patient] was already packaged in their litter and was in obvious pain with an injured arm and ankle due to a fall. I called [our coordinator], who had not yet arrived on scene, and let him know we had it covered, and we slowly brought [the patient] down, stopping to administer Morphine 3 times. We loaded her on the back of the Snowbowl UTV and steadied the litter as it drove down slowly. When we got back to the parking lot, there were more than 6 SAR members waiting.  Fortunately it was a short rescue, because I was pretty worn out."

I can't imagine trying to lug one of those godawful coleman tents anywhere very far, let alone for miles up a boulder-filled canyon!

lol, yep, and there were three tents there, actually. One was set up, as you see in the photo, and two were rolled up, in tent bags. (One was a relatively decent tent, so it'll go into the SAR stash, since we sometimes have to establish a camp for extended missions and it's good to have extra team gear), but the other two were cheapos. And there was the huge inflatable pad, much more suited for car-camping than backpacking. Shoes were left behind, brand new clothing. Kinda weird. Oh, and there were door mats in front of the tent. Bags of trash, random trash. Actually, had we found any ID, those who did this wilderness littering would be fined and could possibly have faced jail time.

Back in the 70s my father was a FS wilderness ranger in Sycamore Canyon. One part of his job was to evict what were basically homeless people who were trying to live back in there. Sometimes they'd find camps like the one you described. Usually they wouldn't see the owners (who were probably hiding nearby waiting for them to leave), but occasionally they would and it'd turn out to be someone who had arrest warrants out for them. Spooky Wild West stuff for sure.