That's what the note said that 43-year-old Michael Snarski of Thornton, Colorado, had left on his dashboard -- that he was not lost; he was on a vision quest. The note was dated 7/24/11.

Two weeks later, someone reported to the Sheriff's office that the car was still there, parked at a pull-out about twenty miles south of Williams, AZ. That's when detectives asked for our K9 team, trained in human remains (HR) detection, to come to the site and check the vehicle. They'd smelled what could have been an intermittent, faint "odor of death," they said. Our dog handler, Cindy, then contacted me and another team member, often her backers on other missions, to accompany her and her four NASAR-certified Golden Retrievers.

All four dogs independently alerted on the trunk of the vehicle, but my teammates and I didn't smell anything in the air or coming from the car. Still, each dog gave an enthusiastic, distinct alert, a couple of them becoming what I'd call frustrated at not being able to find the source of the smell, digging at the ground by the trunk and jumping up on the vehicle with their front legs.

A deputy called his boss for permission to have the vehicle unlocked and the trunk opened. Permission was granted, and we all waited, wondering what we'd find.

Once the trunk was opened, however, there was no visible evidence of human decomposition and no odor -- at least none detectable by our human noses. The dogs were again brought back to the car, one by one, and each now alerted on a specific area of the trunk.

"Show me," Cindy would say when they each alerted. And each dog jumped back up and touched the same spot inside the trunk with their paws and noses. Something related to human decomposition was there, but whatever it was, we couldn't see it and we couldn't touch the numerous items in the trunk to look beneath them.

Later, after the vehicle was towed and law enforcement searched the vehicle, it was discovered that the dogs had indeed found something -- a spot of blood about the size of nickel on a pair of pants.

Following more investigation, an extensive area search was planned and SAR volunteers from both Coconino and Yavapai Counties were called, including K9, ground and mounted units. I'm sure everyone was thinking this would likely be a long, tedious search through difficult terrain. Even the command trailer was being brought out to the site.

K9 units arrived at the search area at first light, to begin while the air was cool and while the light winds would still be coming up out of nearby Bear canyon. That way, the dogs would be able to detect human scent if the missing person were down in that canyon. The wind would (and did) soon change direction as the sun rose, so we wanted to search the rim as soon as possible.

But the search didn't last long. As Cindy and I slowly made our way along the rim with two of her dogs, picking through thick manzanita, over rocks and other pinion/juniper forest debris, and one lethargic snake, another K9 team discovered Michael Snarski's body not far from the road. He was sitting on a blanket, up against a tree, with full water bottles and a couple of uneaten, by then blackened bananas at his side. Facing west towards what may have been the sinking sun on his final day, he still had his sunglasses on. This is the last view Michael would have seen, but without all of the SAR vehicles. His car had been parked where ours now were: 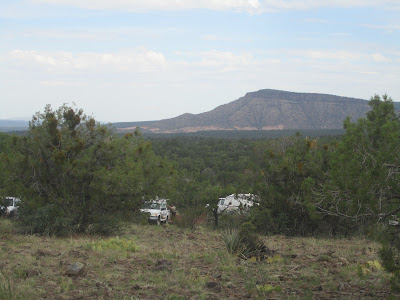 This is probably mundane, but it seems mysterious; why did he die, and why the blood on the pants?

Usually there are details I can't write about (or know I shouldn't) -- details about evidence that was found and aspects of investigations and people's lives that wouldn't be right to expose -- but in the case of the drop of blood, I believe it was just random and didn't mean anything in connection with the man's death. There was a reason the detectives wanted the car searched by the cadaver (human remains detection) dogs, but it didn't turn out that the HR that was found (the blood) had any significance. Kind of a coincidence, really.

As far as cause of death, we're still waiting to find out. I have my own conclusion but really shouldn't guess like that. It's partly based on evidence that was found by LE and shared with us, so its one of those things I know they wouldn't want me yacking about, which would also be disrespectful to the deceased, in my view. If the cause of death is reported publicly, I'll share it, though. Basically, at this point, no one has said that it was suicide, accidental or medical. But I don't think anyone is thinking foul play.

michael was my cousin. Thank you for finding him.