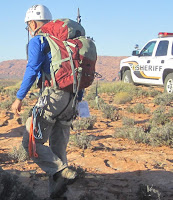 From a recent media release from the office of Sheriff Bill Pribil:

During the June meeting of the International Mountain Rescue Association (MRA), held in Eagle Colorado, the Coconino County Sheriff’s Search and Rescue Technical Rescue Team received full accreditation as a certified member of MRA. The MRA was established in 1959 at Timberline Lodge at Mount Hood, Oregon, making it the oldest Search and Rescue association in the United States.

On March 6th and 7th the Coconino County Sheriff’s Technical Rescue Team completed the Snow and Ice accreditation exam. The team was evaluated on winter rescue techniques. The evaluation included a field exercise in which an avalanche with three victims was simulated. The team was observed in the field by evaluators from the Southern Arizona Rescue Association, Central Arizona Mountain Rescue Association, and the Las Vegas Metropolitan Police Department. The team's knowledge of over the snow travel, snow anchors, avalanche safety, winter survival techniques, winter rescue pre-plans, wilderness medical considerations and patient transport, and winter rescue equipment use was tested in the scenario.

In other CoCo SAR news...

Yesterday, as I was listening to the scanner, I heard about an injured hiker on Mt. Elden. At first, SAR was put on standby by Flagstaff Fire Department, apparently the first on scene and taking over incident command. Once fire department personnel and Guardian medics reached the patient, who'd suffered a head wound with loss of consciousness on the Elden Lookout Trail, and packaged her in a litter, they did request SAR assistance. Team members responded directly to the trailhead and hiked up to rendezvous with the evacuation team already on their way down, providing extra hands to relieve those who needed a break on the difficult, rugged carry-out. (I was unable to respond due to other commitments.) You can read about the mission on Flagscanner.com: Mountain Rescue on Elden Trail

Also, on July 27th, SAR volunteers, myself included, will be giving a P-SAR (preventative Search and Rescue) presentation at Pinewood Camp. I believe we'll be working with kids ranging in age from 4 through 14 and will give them an introduction to SAR (what it's all about), teach them how to NOT get lost and what to do if they do get lost, basic map and compass use, and some hands-on show-and-tell about equipment (the ten essentials). We'll make the three-hour program as interactive as possible and are currently working on a plan for the afternoon.

I'm told that interviews of prospective team members will begin shortly. Following interviews, new volunteers will take part in the Basic Search and Rescue Academy beginning this September, learning skills such as map and compass, GPS navigation, man-tracking, ATV operation, backcountry preparedness and safety, ICS (the Incident Command System) and more. Upon completion of the academy, new members will be put on the call-out roster and be able to respond to missions and ongoing training. If you're interested in becoming a search and rescue volunteer with Coconino County, you can fill out an application with the sheriff's department, but, at this point, you'll have to wait until next year's academy.

Way to go guys! MAR Cert. is a great thing, and not an easy process!