A Search Under the Desert Sun

I was still searching -- looking left and right and sometimes behind me because you can miss things on the backsides of boulders and other terrain features -- but I also kept glancing ahead at that enticing little slice of shade in the distance, beneath the large rock's overhang. I would head to that slice of shade and stop there for a good rest with the two men searching on either side of me. We all needed it.

I was feeling cooked -- broiled, baked, sauteed and steamed. The air temperature was at least 100 F, but the sun reflecting off the sand and rock made it feel even hotter, right through the soles of my boots. I wasn't sunburned, though; the sunblock I'd already reapplied twice was doing its job.

My water and blue Gatorade was hot, and I was now doing more of a shuffle than a walk. Walking in sand in that heat can sure sap your energy.


We'd started searching our rather large segment a few hours before. We had plotted the UTM coordinates for the four corners of the assigned area then entered them into our GPSes, which were set up to record our tracks. Those tracks would later be downloaded by our Coordinator onto his mapping software. We drove up the highway to the southeast corner of our segment, spread out and began an east-west grid search, about a mile with each pass. There was a canyon on the western edge of our segment, which required additional effort to search each time we came to that end. We could see fresh ATV tracks in the sand at the bottom of that canyon, which had been searched from below the day before.

This was the second day of SAR's involvement in the search, with two counties now participating, divided into several field teams. We'd met up at 4am to drive to the search area and get an early start because of the high desert temperatures. The sun was intense by 8am. The K9 teams put special vests on their dogs that were soaked with water, and human searchers exchanged some gear for extra water bottles in their packs. 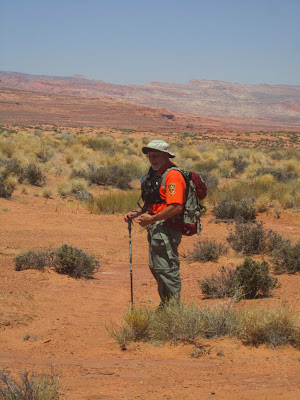 Shortly before I reached that coveted slice of shade, I overhead the K9 teams on the radio. They'd completed their assignment and the dogs were spent. Incident Command offered rides back in the Polaris for canines and handlers, and they readily accepted.

My search partners, both from Yavapai County, angled in towards my location and the three of us simultaneously dropped our packs and ourselves into the shade. We'd completed about half our segment by 11am. Another team reported that they too were taking a shade break before continuing to grid search their segment. We heard the lucky team on the river over the radio, doing their searching by boat and with a spotting scope. (But they deserved that assignment; both had been out there on foot and on ATVs the day before.)

After about 20 minutes of rest, my partners and I resumed our grid pattern, staying alert for the sound of rattling that could come from beneath any bit of brush or shaded bit of ground beneath a rock at any moment. We'd been told to watch out for rattlesnakes and scorpions, but no one reported encountering either one. I'm quite sure they were watching us, though.


Later that day, field teams converged back at base. The subject was (and as far as I know at this time, still is) missing. I can't give any details of the mission, I'm afraid, since it's an ongoing investigation, but I can point you to the brief missing person's report with the young man's photo: Police Search for Missing Page Man.

The search continued the following day, with members of our team's mounted unit responding.

And in other recent Coconino County SAR news....

Last week, I reported about the search in Grand Canyon for the overdue backpacker, who'd begun his hike on the North Rim. I'm happy to say that the missing man, William (Billy) Driscoll, was found on June 17th, tired and unable to each much but otherwise in good condition and good spirits. You can read about what happened in the Grand Canyon News: Overdue Hiker Found on North Rim of Grand Canyon National Park.

Coco. SAR also recently responded to a call for the carry-out of a hiker near the saddle on the Humphreys Trail, who'd fractured her ankle. Four search and rescue volunteers went up to the Snowbowl (ski area), where there was a fire engine and an ambulance already there. Two firemen and 3 personnel from Guardian had been deployed via a Snowbowl UTV up one of the ski runs to the base of a steep route that eventually connects with the Humphreys Trail at 11,400 feet. (We use this route as a short cut when subjects are located near or beyond that elevation.) Coconino County SAR took their own UTV to the bottom of the route and then proceeded on foot. By that time, the firemen and medics were already with the subject. SAR made good time, and when they rendezvoused with the others, they tied the patient into the Stokes litter and carried her up the trail a ways until they found a relatively clear area to descend. They attached a 300-foot rope to the litter and slowly lowered the patient. It took four evolutions to get the patient down to the Polaris Ranger. She and two Guardian medics rode the UTV to the ambulance, while the rest walked down. (Thank you, Randy M., for this information, since I wasn't on the mission.)

There was also a call-out to search for an overdue hiker in the Blue Ridge area, but SAR was turned around at Lake Mary when the subject turned up.

And last night at 7:45pm, as I was at a dinner party, there was another call-out for a litter carry near the saddle on the Humphrey's Trail, for another patient with a fractured ankle.

For riveting search and rescue stories, outdoor adventure stories and more – check out sat tv programming, thanks to the sat tv deals from InternetLion.com.