A Fallen Climber in Jack's Canyon

I had just gotten home when the call came in for a technical rescue in Jack's Canyon (pictured above), about 30 miles from Winslow, AZ. I'd been at the morning session of the map and compass class, part of our team's annual three-day "navigation boot camp," which we put on primarily for members of other teams and organizations. The field session would begin later in the afternoon, so I wanted to stop home for a while to see my dog and have lunch. But SAR called and back to the building I and eight other tech team members went.

By the time I arrived, the gear had been loaded and we were ready to roll. We drove code three -- lights and sirens and speed -- down I-40, listening to our Coordinator communicate with other agencies, including DPS and Guardian helicopter crews and a deputy on the scene. We knew that the Blue Ridge Fire Department was there as well and that it was likely the patient would be airlifted to the hospital before we'd arrive. There's a landing zone at the bottom of the canyon, not far from where the accident occurred. But we kept going, knowing that anything can happen and assuming our help would be needed. That's how we always respond to call-outs.

Sure enough, the patient was packaged and on the Guardian helicopter, en route to Flagstaff Medical Center, before we go there, which of course was better for the patient. Waiting for us to get all the way out there from Flagstaff and then do a long, rugged litter evacuation probably wouldn't be a patient's first choice.

Apparently, the climber had taken a 20- to 30-foot fall, landed on his feet, then went down on his back. He'd hit his head, we were told, but thankfully was wearing a helmet.

After talking with the deputy about what had happened, my teammates and I walked to the canyon rim and a short distance down the trail to take a look at the area. Several of us had never been there before. 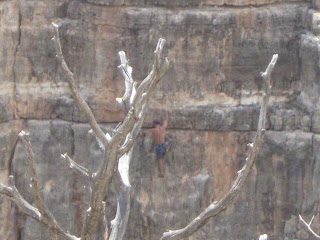 It sure was a busy place on that Saturday afternoon, with several groups of climbers visible in the just relatively small area of the canyon we could see from where we were standing. We watched several climbers on the canyon's far wall and could hear lots of voices coming from below. There were numerous tents set up among the pinon/juniper on the rim.


As we stood there, watching climbers, we discussed how we would have carried out the evacuation had there been no helicopter available but just a waiting ambulance, or if the accident had occurred far from a landing zone. Never know what a future call to Jack's Canyon might bring. 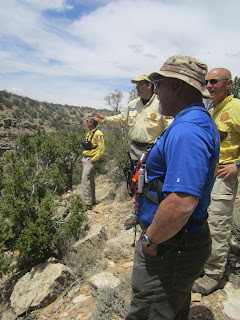