A Technical Rescue in Waterholes Canyon

Twelve of us, including nine technical rescue team members, the Leiutenant and two deputies, stood near the rim of Waterholes Canyon, watching the helicopter fly low over the landscape as the pilot assessed the situation. Would a short haul of the two stranded young men in the canyon be possible? And, if so, was a short haul the best option?

That had yet to be determined by the time our team had driven two hours north from Flagstaff and then overland across the desert about a mile from the highway. We had a lot of heavy gear to haul, especially all the rope, so we were glad to be able to use vehicles and the Polaris Ranger to get it closer to the rescue site.

Eventually, the helicopter landed and the pilot and medic came over to talk to the team. A short haul was not advisable, the pilot said, and the team had already come to the conclusion that a ground technical rescue would be the safest option. The subjects were in good condition without any injuries or medical complaints, so they would be able to assist in their own rescue.

The call had come at around 11pm the night before. Tech team members were asked to report to the SAR building by 4:45 in the morning. Voice contact had been made between the two stranded men and a deputy on the rim several hundred feet above, and the two said they were unhurt and okay to spend the night down there. They had enough gear, food and water to wait for a daylight rescue, which would be safer for all involved.

It was a calm, beautiful day on the Colorado Plateau near Page, Arizona, but the forecast was calling for very high winds, which had already picked up to the south. High winds would make the rescue more difficult, in part because it would hamper voice communication between rescuers and subjects, since the subjects didn't have radios. So once the short haul was ruled out, there was no time to waste getting to the two men and assisting them back to the rim. While no one rushed unnecessarily, the team got right to work.

This was our team's first technical rescue since passing the MRA (Mountain Rescue Association) rock rescue portion of the three-part test, which took place on October 9th. (The third will be the Snow & Ice test on the San Francisco Peaks here in Flagstaff in early March.) To me, my teammates now seemed much more relaxed than before the test. Maybe it was my imagination, but it felt like there was more camaraderie than there had been prior to our day-long evaluation during the challenging simulated rescue. (Edited to add: Just to clarify, this was not Coconino County SAR's first technical rescue by any means. Coco SAR has been doing tech rescue for a long time. MRA certification is not something that's mandatory.)

So, basically the Waterholes Canyon rescue went like this:

Our team leader that day was able to obtain voice contact with the men in the canyon. And, along with other rescuers, decided on a good route to descend and then bring the subjects back up several hundred feet using fixed lines, one below the other on two different anchors. This plan would mean the two men would need to do one more 50-foot rappel to rendezvous with the hasty team, which they were equipped and very able to do, they said.

The subjects were experienced canyoneers. Apparently, though, they'd gotten what they said was some bad information and had been unable to locate a particular "escape route" out of the canyon partway between the starting point at the bridge on Highway 89 and the Colorado River. They had not intended to travel the whole canyon, which would require some very long rappels further down, so I believe they didn't have enough rope to continue to the river, where they could have been picked up by boat. Unable to safely go up or continue down, they'd stayed put until the girlfriend of one of the men reported them overdue and the responding deputy finally made voice contact that night.

In the end, after a two-hour operation from the time the rescuers began their descent until the three of them arrived back at the rim with the two subjects, everything went smoothely, and we were packed up and on the road home by the time the winds reached Waterholes Canyon.

Here are some photos from the mission: 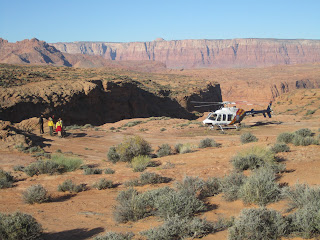 Check out these photos from down in the Canyon:

Congrats on your team's first official technical rescue. Glad everything worked out!

Oh, that wasn't our first official tech rescue. The tech team has been in existence for many years. This was just the first since passing the MRA test, which isn't a mandatory thing at all. Coconino County has been doing technical rescue for a long time.

thanks for posting your stories, I am an ex- TRT guy, so I still love to hear the stories. Good job to all on the waterholes rescue. After 5 yrs with Sedona TRT and 4 yrs as a short haul member with DOT heli- team. I decided to go back to my passion of canyons, having done waterholes 12 times and many others in the area. The reason I am writing is that with the huge increase in canyoneering I think there will be more and more rescues required and some of these could be very difficult. As you know having good information and knowing these areas ahead of time is key. If I can ever provide information about the local canyons, access, etc. etc. please consider me a resource and feel free to call. 928 284 5606