I don't like not responding to a SAR call. It bothers me, and I feel like I should be out there helping instead of staying comfortably at home. Maybe that's silly, because we all can't be available all the time. And this time I was stuck on Observatory Mesa, with two feet of snow on and around my car, the roads, and the big, twisty hill that leads down into town, which hadn't been plowed for hours. It was somewhere around 11pm and snowing and blowing with a vengeance, with ice and pine boughs clattering against our bedroom window, when the phone rang. I knew it was SAR before I even looked at the phone.

And I wanted to go, but I knew I couldn't get the car out and down the hill any time soon. So I called the coordinator on duty and told him I could snowshoe into town if someone could pick me up. (Heck, I could snowshoe all the way to the SAR building, but that would take quite a while.) He told me he'd call me back in about twenty minutes if he needed me.

So I turned the light on and read for a while, waiting. I could be dressed and snowshoeing in about five minutes if he called. But the phone didn't ring a second time.

The call-out said there was a family with three very young children "stuck in a snowbank somewhere" on the Mogollon Rim. That would be about an hour and a half drive ... in good weather. I'd heard on the scanner that part of Lake Mary Rd. was closed due to snow drifts, so there would also be a detour around Mormon Lake. The drive in those conditions, towing the snowcat and snowmobiles, could easily take hours. I thought about my teammates--whoever was out there--throughout the night, wondering how it was going. I thought about the stranded family too. Sometimes the Mogollon Rim gets more snow than we do here in Flagstaff, and we were pushing two feet by the middle of the night.

So I don't know what happened last night or if the team is even back yet. If I hear anything or read something in the paper, I'll let you know. In the meantime, it's back outside to continue digging out, so I can be ready for the next call. 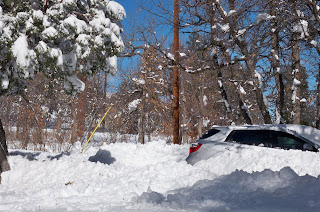 That's got to be frustrating. Was the team able to respond?

Yep, seven people made it to the SAR building in addition to the coordinator. It was treacherous driving, I was told, and took them 5 hours to get close to the search area. Then they heard that another crew with a snow cat (I THINK it was Forest Service, but I'm not sure) located the family and got them out. So our team turned around and headed back to Flagstaff.

We've been out pretty much non-stop since then, though, rescuing stranded hunters. And it's still going on. So now I don't feel so bad about missing that call the night of the blizzard. I did 16.5 hours today.