It's 10am on Sunday, and I'm warm and toasty with my dog, a mug of hot cocoa, and fleece from head to toe as I watch the snow fall on the other side of the large window opposite my chair. I just heard my husband drive by in the plow, which he operates for his employer (and our home), Lowell Observatory up here on Mars Hill at the edge of Observatory Mesa. I must say, it's nice to be in here and not out there right now.

On Friday at this time, I was en route to the Upper Basin area near Grand Canyon to help retrieve a stranded snowmobile. That is, a snowmobile belonging to our team that had broken down in the field late one night during a mission. So three teammates and I were asked to rescue it and bring it home. 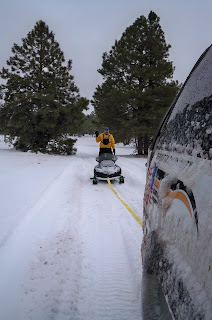 There's Todd, steering the machine as we tow it out behind the vehicle with the Mattrax. I'm afraid he got dumped off several times along the way.

We were also asked to check on a hunter camp while we were there, to make sure the occupant had made it out safely. And, yep, the camp was deserted except for the snowed-in RV trailer.

We returned to Flagstaff the same evening.

On Saturday at this time, I was on a snowmobile myself, back in that same Upper Basin area I've become familiar with after three recent missions there. This time, we were looking for a group of overdue woodcutters.

I hadn't driven a snowmobile since January, and I was a bit rusty. And if you've been reading my blog for a while, you probably know I'm not too great with machinery to begin with.  I do think my skills are improving (a little?), but I did dump the snowmobile--and myself--yesterday, when I hit a deep tire rut and didn't give the thing enough gas to get myself out of it before I tipped over. Other than some snow down my shirt, though, and somehow a little down my ski pants (Oo, cold!), I was all in one piece and so was the snowmobile, which my field partner and I righted back onto its skis.

Further on in our search, we had to dig him out once and me out twice while maneuvering through deep, untouched snow. With me, it was again a matter of not giving the snowmobile enough juice during turns, so I got the heavy machine bogged down in drifts. After more than 20 miles on the thing, though, I was starting to get better at handling the snowmobile and was learning to speed up rather than give in to my tendency to let off the throttle in tricky spots.

Oh, and about the woodcutters. They were found by a couple of our teammates, camped not far off a main, paved road, perfectly fine and not lost or stranded at all. Just another one of those cases of family miscommunication (or lack thereof).

So we all made our way back to Incident Command, loaded up, and returned to Flagstaff, with just enough time to go home to clean up before our team's annual holiday party.

One of our teammates did have to miss the party, though, because he and one of the SAR coordinators (a deputy) had to go back to that very same area, I was told, to rescue another stranded camper. If this past week has been any indication of the winter to come, we're going to be one very busy team!

I had no idea you lived at the observatory. That is awesome!

Yeah, we moved up here in November, 2008, when someone retired after nearly 4 decades and moved out of one of the seven houses. We were very lucky to be able to move in. My husband is the instrument-maker here and also fixes things and plows, so he's handy to have on site.