Trusting My Gear And My Teammates

Have I mentioned that I'm a bit afraid of heights? Well, make that afraid of "exposure" more like. Either way, though, being suspended 100 feet above the ground between two sides of a canyon isn't exactly in my comfort zone.

Still, that's where I found myself on Saturday, with some of my technical rescue teammates on one side of the canyon at Paradise Forks, lowering me, and the others on the opposite side, raising. There was a main line and a belay line on either side, with me somewhere in the middle, hanging while attached to all four ropes.

I could have said no. More than one of my teammates said, "Deb, if you don't feel comfortable with this, no problem. You don't have to do it."  I may have hesitated at that suggestion for a split second, but I said, "No, I'm fine with it." I tried my best to look and sound at ease. Besides, it's better I do it--go over the edge--as much as possible, to get more comfortable with the skills and with the feeling of trusting my life to gear and teammates.

And I couldn't be safer than with SAR. We do things carefully, with redundancy, and with safety checks. As I was tying in to the main and belay lines, a teammate was watching closely. Then I was checked over by three other, experienced people--everything from my seat and chest harnesses to my caribbeaners and knots. The safety officer for the exercise also checked all anchors and main line and belay set-ups. And then, when all team members were ready, I walked off the edge.  Wheeee!

Truth be told, it was actually quite fun. A teammate later told me I had a bit of a "newborn giraffe" look when I was temporarily set down on a pinnacle around mid-canyon (I know photos were being taken, so if one pops up online, I'll let you know), but I soon got my feet under me and stood up on my own. Then I was once again lifted and brought the rest of the way across the canyon on what turned out to be a very smooth ride.

One very useful, real-world example of how this maneuver would come in handy would be if, say, a victim were stranded on some sort of pinnacle or perhaps on the hood of a car trapped in swiftwater. A rescuer could be lowered, suspended, to somewhere between the two sides where the victim was located, do a pickoff or package the patient in a litter, and then be raised along with that victim to either side.

This Saturday's tech team practice also included working with a guiding line, used to keep the rescuer/s and victim/s away from rock walls and obstacles, making the lower and raise easier on both. I thought these set-ups were pretty fascinating, and I was excited to be part of them and to find that I could be useful. By George, I'm learnin' me stuff!

I've honestly been nervous that I wouldn't remember some of the basics I've been taught, even though I've been practicing on the side, when we'd move on to more advanced skills. But I now realize that the basics come into play all the time. They're a foundation for the more advanced skills, so I get to use them even as we advance to more complex maneuvers. I find this all pretty exciting, though I'm still not without nerves. And maybe that's a good thing. Getting TOO comfortable can lead to errors, so I've heard and read.

Other than some training, we've also had a couple of call-outs. One ended quickly when a teammate who'd responded directly to the "last known point," because he lives nearby, found the subject soon after he started searching around that LKP. (Not a happy ending, I'm afraid.)

Then, last night, our team was called to assist Navajo PD in locating an overdue hunter on the Reservation. The man was found ... or, well, he found us rather ... and was just fine. In fact, he was wondering who we were all looking for. Just a case of miscommunication with the reporting party, so it seems.

Oh, and finally (for now), on a recreational hiking note: I recently went on a great hiking/car-camping trip to northern Arizona and southern Utah in the Paria-Vermillion Cliffs Wilderness Area and visited a place called White Pocket and the now internationally known "Wave." Here's one of the many photos I took of the Wave before my camera went kaput (again): 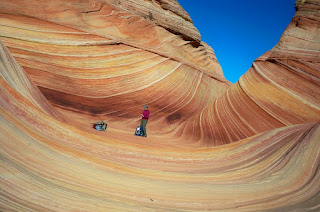 If you want to see more of my pics and read an article I wrote about the hike, see Hiking The Wave In Coyote Buttes.

Now, off to replenish the munchies in my 24-hour pack before our next call-out.

I honestly can't believe this.

Well I believe you Deb! Sounds like a lot of fun. After reading some of your posts i have looked into SAR teams in my area. Haven't found any close by. Turns out there aren't too many rescues out here in the Desert. And the places where SAR might be needed are 3-4 hours drive and on National Park Service land. Oh well. like I said...sounds like fun.

lol ... thanks! Unless I'm having one long, satisfying dream, I'm pretty sure this stuff is real.

I just looked at your blog and see where you're from. I know Texas has quite a lot of teams (I have a directory going on another site of mine), but I guess you'd know better than I if there were any nearby. Guess you're in a SAR black hole. :)