When I walked in the door early Sunday morning, Steve told me I smelled like smoke, but my nose didn't agree. Maybe I just got used to it overnight, as I sat at the road block for about twelve hours, the wind gusting from time to time, rocking the vehicle and toppling the barricades.

Search & Rescue had been called upon on Saturday to man the road blocks in Williams, Arizona, to keep folks out of an area of town that SAR had helped evacuate the night before, when a prescribed burn got out of hand and became a wildfire that, as of today (Monday), still threatens homes.

See: Williams Still in Danger from the Arizona Daily Sun. 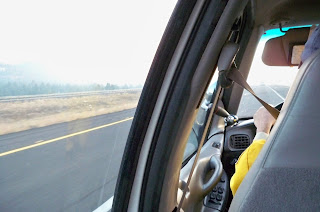 In the photo above (taken late afternoon on Saturday), you can see the smoke ahead-left, as my teammates and I approach Williams, where we relieved the crew that had been there overnight.

On Sunday morning, after our group returned from Williams, I had just enough time to grab a shower, change clothes and go to the Man-Tracking class for the Basic SAR Academy. I could probably have skipped the morning classroom session and just gone to the field exercise later, when I was scheduled as an instructor, but I wasn't all that tired (yet), so I decided to sit in on the classroom part too.

Here, the whole group is briefed before the field session.... 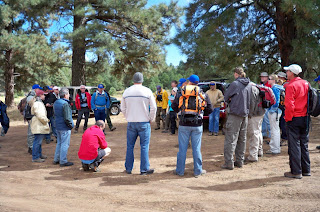 Then I took my group of three new trackers to their first print. They documented it as they'd been taught and then got started following the track.... 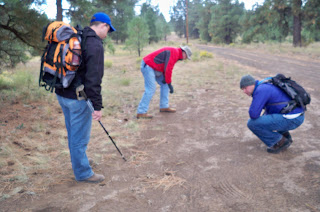 It rained off and on, and the wind continued to gust, making the tracking challenging. Despite losing the track now and then, however, the group managed to pick it up again and follow it to the end. 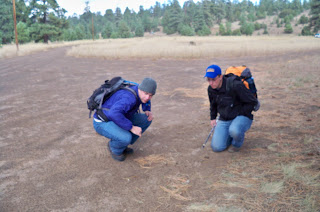 So, Saturday had been the GPS class, beginning at 8am in the classroom, and then we went out to practice in the woods in the afternoon. Below, Academy members and my co-instructor (front) were entering the next waypoint into their GPS's, which they then had to convert from Latitude-Longitude to UTM and plot the coordinate on their maps before navigating to that point.... 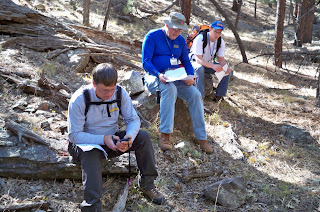 It was at that time--around 3pm Saturday--when there was a call-out for a lost 15 year-old, so I'd left my group with the other instructor and quickly hiked back to the road, where another teammate scooped me up and we headed to the SAR building.

That mission was quickly concluded when some tracks were discovered and then the DPS helicopter spotted the girl, and we returned to the SAR building just before 5pm. Ten minutes later, I was off to Williams. So it had been all day Saturday in GPS class, then to the mission for the lost girl, then to Williams for the overnight road block, then to the tracking class on Sunday. And today, Monday, is a continuing evidence search. Whew! But I did get a good night's sleep last night, so I'm ready to search.

Oh, yeah, and I practiced rappelling last week, too, with a couple of my tech rescue teammates. I was nervous (as usual) going over the edge the first time through, but when I hiked back up and went for a second and third descent, my nerves calmed (as usual). We were using a conditional self-belay on a second line, which meant I didn't have a free hand to brace myself against the rock, like I usually had before. So that was a little different for me.

Here, you can see the brake rack in my right hand, while I tend the Prusik with my left. It was about a 30-foot cliff. Maybe not a lot ... but enough.... 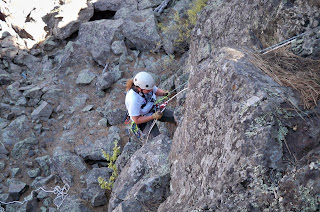 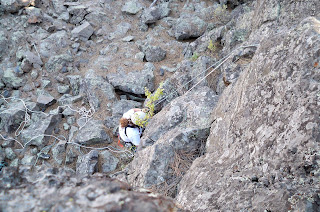