We've finally moved! And that's a good thing in a number of ways.

For me, personally, I now have no more than a 10-minute drive (less if it's in the middle of the night and there's no traffic) from home to the building. That's not the case for some team members who live on the far east side of town, but I think the new location is better for more of us than not.

Also, we now have a lot more space, which will make moving things around and getting ready to head out for a mission much easier. And I'll be interested to see if our response time gets better. For one thing, the new building is right behind the Sheriff's office and the rest of the Law Enforcement complex, so we'll no longer have the equipment and SAR vehicles at one end of town and our coordinators at the other. There's also much more room for doing some practicing, like we did a few nights ago for the Rock Rescue Academy.

There's still much needed for the new building, not to mention the funds to pay for it, like a bay door (or is it two?), some interior block walls, plumbing and a bathroom, the completion of the offices and meeting room, etc. But at least we're now able to occupy the facility.

And here are a few photos: 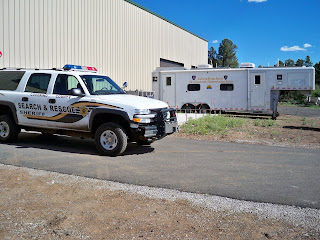 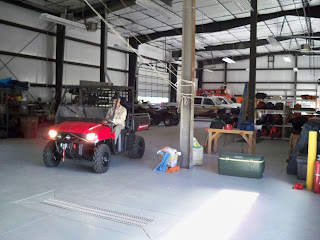 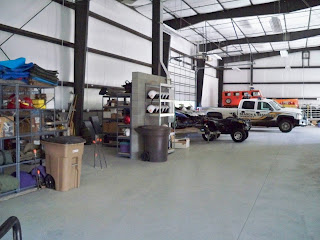 If you look at the photos in my last entry, taken in our old SAR building (aka "the 105" or "SAR garage") while my teammates and I were practicing ascending, you can get a sense of the difference.