I think I've aged about 50 years overnight. Let's just say, I'm getting well-acquainted with muscles I must have been ignoring for far too long, as I shuffle around the house this morning, oo-ing and mpf-ing.

For a while yesterday, as I was dangling from a tree limb, spinning and bumping into the trunk, struggling to do what I thought looked pretty straight-forward, I was about ready to give up. Matter of fact, when I took a break to rest my quivvering muscles and give someone else a chance to practice ascending before hitting the real rock walls, I had to bite my lip hard to keep from crying. I was pissed! (At myself.) I really want to be able to do this. I really want to pass that proficiency test in June.

Here's a picture of a teammate going right up the rope. The one manning the belay kept letting out the line, so we had more to climb than the actual distance from the ground to the branch: 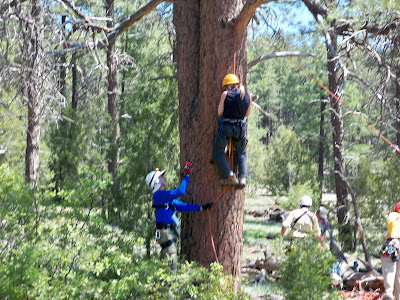 After time spent collecting my thoughts and some personal attention from a teammate, who graciously tried to help me get the hang of the movements, I was back to the tree. Again, what seemed to come easily to others--and what I thought should come easily to me too, because I'm not uncoordinated (you should see me Jazzercise!)--I was again at a loss.

UNTIL ... one of the guys said, "Hey, why don't you try it one-legged." He explained what to do. I took my right foot out of the right "step" (basically, loops made of webbing), followed my teammate's instructions on how to alter the movement, and right up I went! I was so thrilled. In fact, I heard someone on the ground say, "She's going up faster than anybody." I wanted to cry again, but this time because I was elated.

And then I went to the bottom of the cliff. I thought, hey, no problem now; I can do this! But the fatigue from the stress and over-exertion on the tree had worn me down. My legs were shaking and every arm and back muscle was tight. As soon as I started up, I knew I was in for a long, slow grunt to the top.

On both ascents, I had trouble getting started, which fatigued me even more. When I finally did get moving upward, I used some quiet swearing to help me along, particularly over the difficult sections where there was overhanging or "bulging" rock.

Matter of fact, just below the top edge on my first ascent, I thought I might have to go all the way back to the bottom. I just couldn't seem to make the moves to get past the overhang, and I was having the hardest time getting a foot or leg up to where I could heave myself away from the rock. I needed to get the rope off the rock, so I could "throw" the ascender past that bulge in the cliff. The teammate manning the edge was leaning over, trying to talk me through it, saying, "Now, there are a couple of things we can do here. You can put your foot here on this ledge and push yourself up...." Uh-huh. My foot would have been right about the level of my ear. Nothing I tried seemed like it was going to work.

By the end of the second ascent, though, I was actually starting to find my rhythm and figure out the technique that worked best for me. And I managed to get past buldges (I don't know what else to call them) with much less struggle. But I didn't have the energy left for a third go-round to see if I could do it even better. It would have completely done me in, and we still had hours of training ahead of us. 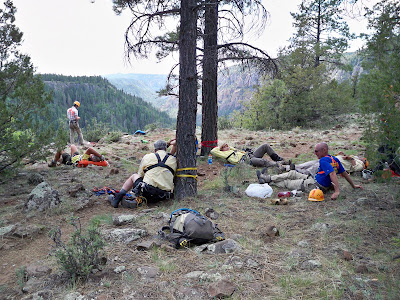 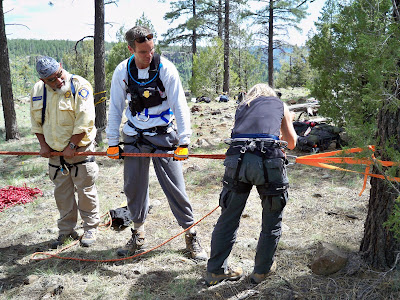 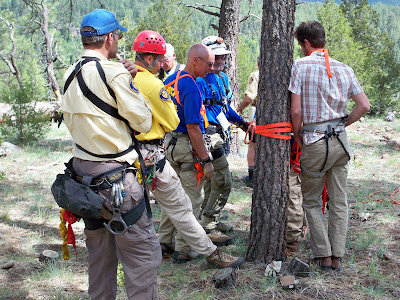 We covered a lot yesterday, and today I wonder how much I've retained, both mentally and physically. I'm definitely going to take my experienced teammates up on their offers to meet us newbies at the SAR building for some practice between trainings. I'll have to if I'm ever going to pass the proficiency test at the end of the five weeks. If I do, it'll be a big accomplishment for me. But, if I don't, I'm going to keep trying and working at it until I do!
_____________________________________________

I found this YouTube video, which shows the technique I was using, with one foot in the step, the other loose. Now, why does this look so easy here? One thing, though ... this guy, for the most part, is ascending away from the rock face, with no overhangs: www.youtube.com/watch?v=P6fhmg5HlnU

Now, why can't we do it THIS way? www.youtube.com/watch?v=KGvibmr2CIU (I suppose this would really hurt if you were against the cliff!)

Email ThisBlogThis!Share to TwitterShare to FacebookShare to Pinterest
Labels: Training

You're doing so great, Deb! You should be very proud of yourself. I'm proud of myself for bearing to watch you endure pain. And learn. And help folks. And learn to help folks more. Coooool, girl!

You'll hear from me soon. My wife & I have a question or two 'bout you new camera. (Beautiful pics. Cristal sharp even when blown to big-time size--over 2 x 1028 mp wide on this screen. That's a poster. We're impressed.)

Hope all's well with you & yours, Ramkitten. All's fine out in CA with wife, Lori, and me. Sho' 'nuf spring-time fine. :o)

Thanks for such nice words! What a lovely thing to find this morning. I don't know that I'm always happy, but I do love being part of SAR, and it sure feels good when I get the hang of something. Sometimes I have to go over and over things other people pick right up, but I usually get it eventually if I keep plugging away. And sometimes it's just a matter of figuring out my own system or my own way of remembering how to do something.