No Map, No Clue 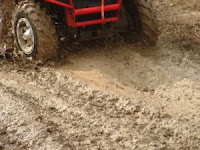 It's 10am, and my face is just about thawed out. But when I got off that machine at 5:00 this morning, I couldn't feel my nose, and my mouth wouldn't work well enough to say, "Whoo-ee! That was colder'n a witch's..." Well, anyway.

I got that ATV ride in after all, and there was no getting around it this time. Actually, it even bordered on fun. I mean, why not get out of bed in the middle of the night and freeze your face, hands and other poorly-protected body parts off while noisily riding around on Forest Service roads? Beats sleeping in a cozy, warm bed anytime. (Not!)

But at least I got over my growing phobia about those machines and now know I can hop on any time I'm assigned to an ATV team. I shouldn't go a year and a half without riding now that I'm in SAR, and we do use the quads quite a bit. I've gotten used to driving the Polaris Ranger UTV, but that's quite a different ride in my opinion. More like a little car than how the ATV's feel to me.

Anyhow, the call-out was for four lost young adults (college students, I believe), who'd parked their vehicle just off a main road at about 9pm yesterday and went on foot in search of the Lava Cave (or "Ice Caves" as the deputy was referring to the place last night), which is a mile-long underground tube, basically. From where the "kids" (hey, I'm almost at that age where I can say that about college students) had parked, the Forest Service access was too snow-covered to drive, and the road was gated and closed, I believe.

Normally, it should have been something like a 3-mile walk. That is, if they'd had a map. Instead, the foursome probably walked 8 or 10 miles before they finally decided to call for help at around 11:45pm. By then, they were exhausted, cold and thoroughly lost. Luckily, just as with the injured woodcutter night before last, one of them had a lighter and was able to start a small campfire to keep them warm.

Unlike the night before last, however, we didn't have the help of a helicopter, so a deputy started driving around out there, periodically running his siren, while two of us and a coordinator from SAR were on the way. The deputy did have cellphone contact with the subjects, so that was a big help in figuring out their approximate location. Eventually, they reported hearing the siren in the distance, which narrowed things down even more.

My teammate and I got to the staging area at around, oh, 3am I guess, unloaded the two ATV's we'd brought along, strapped our packs and, just in case, our snowshoes onto the quads and took off to find the foursome. We went in from a different direction than they had, where the roads were more passable. Still, the deputy got his pickup stuck more than once in the soft snow and mud.

After riding several miles, while I glanced side to side looking for the flicker of a campfire and sniffed at the cold air for any hint of smoke, Al and I spotted a flashing light ahead. And, moments later, four figures with that stiff, hands-stuffed-in pockets, chilled-to-the-bone stance converged around my teammate. I pulled up alongside him, and immediately one of the young men came over to shake my hand. They thanked us profusely more than once.

So all was well that ended well. Al buried the small campfire in dirt and snow, and we waited for the deputy and our coordinator to make their way, spinning and sliding, to our location. On the ride back to the Sheriff's Office, once we'd loaded the ATV's at the staging area where we'd dropped the trailer, I heard comments from the back seat along the lines of "man, I'll never do that again" and "I'm never going out there without a guide." I wanted to turn around and say, "You would have been okay if you'd had a map and known how to read it," but I held my tongue. They were nice "kids," and I'm sure they didn't need me to tell them what their mistake was.

Email ThisBlogThis!Share to TwitterShare to FacebookShare to Pinterest
Labels: Other Search, Winter Mission

Could you post photos of the equipment? I'm curious what exactly it looks like. I know bringing a camera to an SAR is in bad taste, but maybe during some down time.

Thanks, and great job!

Which equipment did you mean? Sorry, I wasn't sure if there was something specific you were referring to. Do you mean from the mission before this one--that is, the canyon rescue?

Actually, many SAR folks do carry cameras, and some teams actually document missions on video (though not ours). It's pretty common practice to take photos. I personally don't carry a camera on missions, though. Heck, I have a hard enough time trying to keep track of my GPS, compass, pen and paper and all the other things we need to be able to grab on the fly. I'd surely either drop or lose a camera.

Most of the time, photos taken during missions show SAR personnel and not the subject/s. If the rescue-ee is in a picture, it's usually not a face shot (as far as I've seen).