Putting Skills to the Test 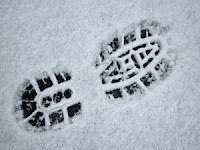 Tracking was something I first learned during Basic SAR Academy in the fall of 2007 and have practiced those skills time and again during previous missions, but never before have I officially been put on a "tracking team." Not until yesterday that is, when one of our senior members pointed to me and said, "Is your stuff ready? Good, grab your gear and head to the staging area. You guys (referring to myself and two teammates) will be the tracking team." My mind immediately went into review mode.

At about 11:00AM, as my teammates and I drove to the Doney Park area east of Flagstaff to begin the search, I mentally ran through all the tracking basics I could recall. Things like, measure the stride heel to heel, or toe to toe, and mark it on my hiking pole with duct tape. Do I have duct tape on my pole? Check. Measure the length of the print, the width of the ball and the heel, and make a sketch of the sole pattern. I double-checked to be sure I had flagging to mark tracks or other clues, and I knew I had a flexible measuring tape and a Sharpie (for writing on the flagging) SOMEwhere in my pack. Darn, I thought, I should have re-organized my pack the day before as I'd promised myself I'd do. But I hadn't.

That's been a weak point of mine. For all the backpacking I've done, and all the gear management, I've been incredibly lax when it comes to reorganizing and replenishing my 24-hour pack following each mission. So mission after mission, it's only gotten more topsy-turvy and more lacking in certain items. Like FOOD for one. Shame on me. This time, that meant my stomach was growling for all my teammates to hear, and I had to take off my pack and quickly sift through the contents to find the measuring tape and marker. The one time I had to ask a teammate to borrow a Sharpie, I felt like a doofus. Never again!

Anyhow, when we got to the staging area, we were very briefly briefed and shown some tracks known to be--or at least presumed to be--those of the subject. My teammates and I did the necessary measuring and began trying to follow the girl's movements. We went back and forth, round and round. We'd pick up the track then lose it. Find it and lose it. Seemed she'd changed directions quite a bit. And given the fact that there were many prints made by different people in the immediate vicinity, and some ground that was not the easiest on which to track, the task was quite a challenge.

(No, by the way, that isn't a photo of one of the prints we were following. I WISH it had been that easy!)

At the same time, though, I realized that, over the past 16 months, I've definitely gotten better at "seeing." I was able to pick up small portions of prints and detect "shine," which is basically a track left as a result of flattening, leaving no evidence other than the way the sun (or artificial light) reflects on the flattened surface.

Still, after a significant amount of time had passed, we trackers hadn't gotten out of sight of the staging area. We were making wider and wider circles, though, cutting for sign and attempting to find matching prints leaving the area, to determine a direction of travel. In the meantime, other teammates were carrying out different assignments, including driving area roads and hiking to the top of nearby hills. The team tracking dog and members of our mounted unit came out as well.

We were looking for a juvenile, who'd been missing since sometime during the night before. As of early afternoon, the air was still but chilly, and we were intent on finding her before sundown. We knew she wasn't dressed warmly enough.

Eventually, assignments were changed as the situation warranted, and I ended up on a team that was asked to drive some unpaved roads and a pipeline. As we went slowly along, periodically spinning our tires on the snow-covered cinders, I leaned out of my passenger-side window, alternating between scanning the ground for prints and the forest for any sign of movement or anything that didn't belong. As for the latter, all I saw was a very old, smashed car with remnants of two very dead pigs in it. Um ... interesting. But no prints.

Just as our team of three was about to leave the vehicle when it could go no further, and head out on snowshoes, we heard a voice on the radio say, "I've got the subject." Yay! And she was basically okay. Yay again! Some medical attention was needed but nothing that sounded too serious. A member of our mounted unit had made the find.

Oh, and those prints we'd been following? Well, not the right ones after all. It happens. What matters in the end is the happy ending.

And happy about a successful mission myself, I called my husband and asked him to meet me at a favorite Mexican restaurant not far from the SAR building. After a grande burrito (and a little of Steve's too), which made up my breakfast, lunch and dinner rolled into one, I headed home and fixed up my backpack. Okay, NOW I'm ready for the next one!

I must ask: Dead pigs in a smashed car? Were the MythBusters filming in the area? Is Gary Larson coming out of retirement?

Yeah, it was really odd. I almost wish I'd had a camera, but it would have been a warped picture, because it was a warped scene. These were big pigs, and they still had quite normal-looking heads. Wish I knew the story behind THAT scene ... or maybe not. The car looked like it had fallen off a really high cliff, though there was no cliff around.