SAR Ops: From Classroom to Call-Out 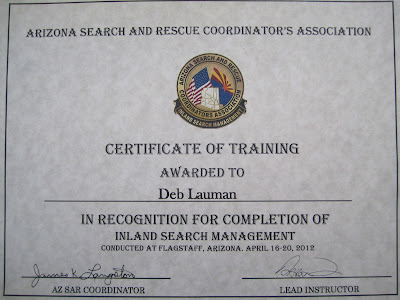 I had just received my Inland Search Management class certificate the day before, on Friday. At 4:15am Saturday morning, my phone beeped me awake with a text message then rang moments later. It was a call-out for Operations leaders to respond to the SAR building regarding a search for a missing person -- my first call-out as one of those Ops folks.

Also the first to show up, I found a note on our Coordinator's office door, saying he'd gone to the main Sheriff's Office building -- something about picking up information regarding the subject's recent cell phone activity -- so I waited. I wasn't sure what the procedures were for our team's Ops volunteers as opposed to what I usually do when I arrive for a regular call-out.  But two, more experienced Ops leaders walked in within minutes and put me to work. Then our coordinator returned and gave us a short briefing.

While I shouldn't ... well, can't ... give many details about the search (I have to remind myself of that sometimes), I can say it was fun (probably politically incorrect but true) coming up with various scenarios and working on plans for the search.

Shortly after our SAR Coordinator had briefed us on the situation, I'd been instructed to call one of our volunteers who lives in the area of this search, which was a good distance from our base in Flagstaff. This searcher is often notified directly when there's SAR activity in his neck of the woods, so he can get a head start as he did this time, heading out to meet with the RP (reporting party) and drive some roads in the area. He knows those roads well.

Next, I helped prepare a briefing packet for the Initial Response, and then several of us leaned over maps that had been spread out on the conference room table, at times our heads nearly touching. Cell phone information was plotted on those maps, fingers followed contour lines and Forest Service roads, distances were measured, and scenarios hashed out and re-hashed.


Not long before the general call-out was made to the rest of the team, two of the Ops leaders -- also regular members of the unit, like I am -- left for the search area. They would eventually rendezvous with our volunteer already down there and assist with the "Route and Location Search," which is what we're calling a hasty search nowadays, based on what we'd come up with as the most likely places the subject might be found.

I'm happy to report that the information gathered in the initial investigation, combined with the scenarios and plans that were formulated back at the SAR building and the quick response from our volunteer in the area, the subject was located and in good condition.

I was also able to attend the next call for Ops leaders just days later, to discuss a potentially very complex search in remote, rugged terrain. I didn't say much at that meeting, except when asked directly for my opinion, but I found it really interesting to listen the other, more experienced Ops leaders and law enforcement/SAR personnel talk about scenarios, logistics for getting a large amount of specialized gear and personnel into the area, and weigh the risks against the quality of the information -- or lack thereof -- that was available so far.

Yep, I really find this SAR Ops stuff fascinating. Although I already knew quite well what goes on "behind the scenes" of a SAR mission and what's involved in more extensive, multi-operational period and multi-agency missions, the Ops classes I've taken so far have really reinforced the knowledge that there's so much more to SAR than people just showing up to wander around, looking and how important it is for as many people as possible be trained to work within the Incident Command System, particularly for large, complex situations. It also drives home the message that taking the time to properly investigate and plan a search, as opposed to just rushing out to the field, can really save time in the end and get the missing subject found sooner than later.

Our own Cindy McArthur received word from NASAR Canine Committee Chair, Ann Christensen, that her dog, Nitro, who passed away earlier this year, has been selected to receive the NASAR Canine of the Year award. Christensen stated, "This year, we were very fortunate to have a number of deserving canines nominated for this award and the competition this year was stiff and the decision difficult," but, in the end, Nitro was chosen for his years of excellent service to the SAR community.

Nitro will be honored and the award presented at the 2012 NASAR Conference Closing Award Ceremony on Saturday, June 9th at Lake Tahoe.


And speaking of SAR canines...


The 2nd annual Arizona K9 SAR Conference, held here in Flagstaff, AZ, just concluded this past Sunday and, once again, was a great success, with more than 60 handlers and their dogs attending. We're looking forward to more of these educational training events in the future.

Email ThisBlogThis!Share to TwitterShare to FacebookShare to Pinterest
Labels: Miscellaneous, Other Search

Here's something I've always wondered about. How do SAR personnel get cell phone data about missing persons in the first place? Do you just call up the cell phone company and say, "Joe Schmoe went missing, tell me everything you know about his phone for the last four days?" Do you need some kind of a warrant to get that information? I'm just curious about the balance between privacy (who can use my cell phone data to find out where I am) and the usefulness of cell phone data in missing persons cases.

I really don't know the details about the process of obtaining cell phone information, since that's something the law enforcement personnel does. But all we were given was a vector based on a cell tower ping, which is a very large area. Keep in mind that this was someone who'd made a call to a family member, saying he was lost and then the call ended and that was the last contact he had with anyone by phone until he was found. So whatever information was obtained relating to his cell phone activity was in the interest of finding him and that's all. And it helped to do that.