The sand-blasting lasted less than a minute as the helicopter lifted off, and then it was quiet. Very quiet and still, save for a distant tweetle (of a Canyon wren perhaps) and a curious fly buzzing my ear. I stood there for a long moment, taking in the silence and surveying the scenery. We'd been dropped off on what seemed like an island, on a shelf between the Esplanade high above us and the Redwall cliffs below.

This was my third day on what had been, so far, a weeklong search for an overdue and very experienced canyon hiker. Today was his 66th birthday, and I was hoping to wish him a happy one ... or that someone else would at least. Was he out here somewhere in this vast, rugged, incredibly beautiful landscape of colorful rock layers, cactus and cliffs? If anyone could survive out here, he could. But for how long? Or was he long gone maybe, alive and well out of the area? Lots of scenarios had passed through my mind and in the minds of other searchers over the past week.

My teammate broke through my thoughts and the silence.

"You can search the inner part," he said. "I'll go out near the edge." He knows I'm not fond of edges when I'm not on a rope.

We both hoisted our packs, heavy with water, and began walking slowly through the cactus and desert brush, studying the ground and stopping frequently to look around for anything that didn't look "usual"--a color that might catch our eye, bird activity. Any kind of sign that another person had passed through the area. We were also listening and looking carefully for rattlesnakes. Both "pinks" and "greens," the latter being the very deadly Mohave rattlesnake, had been seen (and heard) during the search.

These were some of the most difficult tracking conditions I'd encountered, not just the rocky and coarse, sandy substrate but the fact that wild horses and other critters had tramped all over the place, not just here but also the bottom of the canyon where I'd searched two days earlier and on the Esplanade, where I'd searched two days before that. Add the age of some of the tracks we had encountered during the search, and I really had to go slow, look around at the same spots from different angles and literally get down on hands and knees at times. My teammate and I occasionally consulted with one another: "Is that a footprint or a hoof print?" Actually, sometimes, in some conditions, it's hard to tell.

We searched our canyon island from end to end, looking carefully at the "pinch-points" to the north and south, where someone would have to have walked in order to get around the side canyons, the heads of which left little room to negotiate the dropoffs. No signs of human prints or other evidence.

We took a break in the shade of a large overhang, careful to check there too before sitting down, in case someone else had also taken respite in that cool, cozy nook. But again, nothing.

We watched a single, circling vulture, but the bird soon moved on and circled somewhere else.

And we found nothing more before the helicopter came back for another sandblasting, to pick us up and fly us back to Incident Command where we converged with other field teams. No one reported any new sign on this particular day.

But as far as I heard at the last general SAR meeting, there is more searching to be done, to follow up on sign found by a Park Service employee who was helping with the mission. I'd seen him when he started off at the head of Mohawk Canyon, prepared to be out for as many as six days. He was one of several canyon experts who's assisted the Sheriff's Office and our team with this search.

Want to read more about this mission and who we're searching for? See... 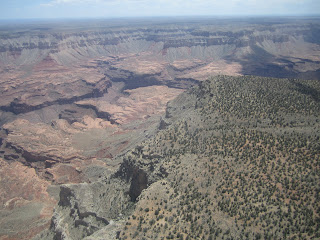