That was fun! And it was a challenging exercise, too.

Members of Borstar (which stands for Border Patrol Search, Trauma, and Rescue) out of Tucson invited our technical rescue team to join them for some training in Sedona. They'd come up from southern Arizona on Tuesday to work on wilderness survival and high angle rescue skills, setting up camp in a beautiful spot overlooking red rock country.

On Wednesday morning, those of us from Coconino County Sheriff's Search and Rescue who were available to participate drove down to meet them, and, after introductions were made around their morning campfire and breakfast and coffee were consumed, we moved to the site of the day's tech training: the canyon at Midgely Bridge.

The goal for the day was to set up a high line across the canyon, then do some evolutions with a rescuer on the line, sending that brave soul out to the middle of the canyon, lowering and then raising the rescuer, and then hauling him or her back to one side of the canyon or the other. (I heard some onlookers refer to what we were setting up as a "zip line," but that's something quite different. We certainly didn't want to send anyone "zipping" anywhere.) 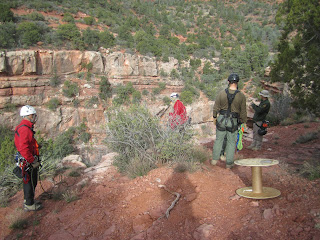 The first part of the operation was a real challenge, given that we didn't have one of those guns that shoots rope. (I've not seen one in action yet, but I've heard about this piece of equipment several times -- every time we have to haul rope from one side of a canyon to another, actually.) Once the rope (the track line) had been secured on the "near side" of the canyon, a Borstar member rappelled down to the bottom, brought the rope across and hooked it up to a line sent down from the "far side," so the other end of the rope could be raised and anchored over there. Problem was, there were trees in the way, and the rope had to clear those trees. And it was a lot of rope. The canyon was just shy of 300 feet from rim to rim.

No one was in a big rush, but it took quite a long time just to get the rope strung across the canyon. Then came the task of actually setting up the anchors, the artificial high directionals on both sides, the tag lines, and the hoist line. Issues were discussed (ie. the angle of the monopod and guiding lines), and the teams on either side hiked around to the opposite rim via the bridge to inspect the other team's set-up before any evolutions took place.

Finally, it was time to send someone across, down, up and over. Some challenges were had along the way, but, in the end, everything was done safely and successfully. Here are some more photos from our fun day of training. (Some of my teammates went back to Sedona for a second day of joint training with Borstar.)....