A Happy Surprise in Waterholes Canyon 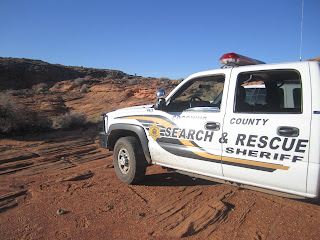 Once upon a time, there was a man in a canyon. Well, not just in a canyon, stuck in a canyon. This was a very deep and narrow canyon, and the man had been stuck down there for four days and three nights. Three very cold nights, that is, with little to protect him from the elements but a thin jacket and leaves he stuffed in his shirt. A winter storm had visited the area while he was down there, alone.

The man, a traveler from Europe, had run out of water in his Camelbak, probably on the first day. He had no food. He'd injured his left ankle, which was severely swollen, and had bad rope burns on his hands. By the fourth morning, he'd given up hope and "made peace," he later said. He knew he would not survive another night.

But he did! Thankfully, the cards were in his favor, as was his own strength, so he spent that fourth night in a warm bed instead of freezing, thirsty, hungry and possibly dying in that canyon.

The man had entered the canyon on Friday. His flight home left without him from Las Vegas on Saturday. (Good thing it was that soon, because no one may have realized he was missing until he missed that plane.) On Sunday, his wife had called for help when her husband failed to return, and that call for help was relayed to the Coconino County Sheriff's Department.

In the wee hours of the morning on Monday, the man's vehicle was located at the top of the slot canyon, in a pull-out along the highway south of Page, Arizona. The Search and Rescue team was called out at about 4am, and north we went from Flagstaff. It didn't look good for the man we had to assume was somewhere in that big canyon, with many rappels, one about 400 feet in vertical length, between the highway and the Colorado River.

But then things took a turn ... for the MUCH better: A deputy, walking the rim and calling out in the dark, heard a voice answer from below. That great news was quickly relayed to our team as we drove, and the mood changed. Approximate coordinates were called in by the deputy on scene to our coordinator in another vehicle and transmitted from our coordinator to us. Then our teammate in the passenger seat, an expert canyoneer very familiar with this canyon, plotted those coordinates on the map, knowing it was not possible to pinpoint the man's exact location by voice contact alone.  Given a good idea of where he was, however--although he could have been at the top of a rappel or at the bottom--rescue scenarios were hashed out and re-hashed among us. Everything would depend, of course, on the man's actual location in the canyon and his physical condition.

The rescue could not have gone more smoothly. Two of my teammates and a medic from Page Fire Department entered Waterholes Canyon via a known "escape route" not far from where voice contact had been made from the rim. Carrying medical and warm-up gear, extra food and drinks (including some water I'd boiled for hot cocoa), they made their way down and then up-canyon towards the subject.

Meanwhile, the rest of us came up with a backup plan in case the man needed to be raised out of the canyon with a technical rope rescue system. The DPS helicopter had landed and the pilot and medic stood by.

Regarding the helicopter crew, they'd flown over the canyon and spotted the man, but they would not have been able to short haul him from his current location. The canyon was too deep and narrow. And given the fact that the man was standing and waving his arms, the added risk of performing a short haul, had one even been possible, was deemed unnecessary. The man would either be assisted out by rescuers under his own power, or he would be "packaged" in either a litter or a harness and raised out of the canyon with an attendant.

As it turned out, the man (perhaps somewhat aided by adrenaline?) was able to tough out his injuries and exit the canyon via the escape route, with the help of the three rescuers. As his head popped up over the rim, we all saw a big smile on his face, and we all smiled, too.

And in other recent Coconino County Sheriff's Search and Rescue news....

There was a mission in Meadow Canyon, a moderately technical canyon south of Flagstaff. This was a search for two overdue canyoneers. (Canyon rescues seem to be ... rather, I would say ARE on the increase in the area.)  I was unable to respond to this call, which came in the middle of the night, because I couldn't leave my sick pup (who's now fine, thankfully). But a teammate gave me the scoop. He said.....

"I went on that call last night thinking it would last maybe 6 to 8 hours (I had a job lined up at noon) and instead it lasted 16 hours. A couple guys in their early 40s were overdue from a canyoneering trip. Eight of us tried all night to find roads that would take us to the edge of the canyon but with no luck. The back roads were muddy, icy and snow covered. The helicopter saw the subjects' campfire and got their coordinates, but we still couldn't get to them. With daylight, a radio was dropped to them and they claimed they were too tired and cold to go further and were afraid of the almost 100-yard swim in from of them. We talked about sending two people in by helicopter to help swim and hike them out but opted instead for a short haul. The chopper was low on fuel, so the subjects were flown just to the rim, and we had to pick them up via UTV and ATV. The road was strewn with boulders, mud and snow, and it took a couple of hours. On the way back, the ATVs got stuck in the snow a number of times. It was a long day, but the subjects were very thankful."

So, good, another happy ending!

******
Need a new read? My novel "I. Joseph Kellerman" (which has nothing at all to do with SAR) is available on Amazon Kindle and in paperback from Amazon or my website. Thanks for putting up with my blatant plug.

I'm a sucker for a happy ending.