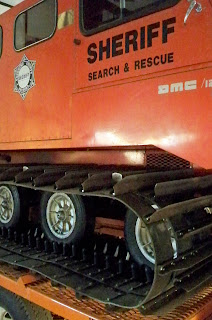 And I'm still an addicted ... uh, dedicated ... SAR member. It's just been a while since I've posted and just as long since I've been on a mission. Actually, compared to most of the past few years, when it wasn't unusual to get a least one or two calls per week (lasting anywhere from hours to days), it's been relatively quiet lately. There has been some activity, but I've either been out of town at the time or tied up with my elderly mom, who I take care of and who's had some medical issues lately.

We did have a decent snow storm back in January, when I-17 and other slippery roads in and out of Flagstaff were shut down for most of an afternoon, evening and night, stranding motorists. Several SAR volunteers were hand-called that night (as opposed to a general call-out) and went out in the storm to bring water and blankets and other supplies to people stuck in their cars, and rescue some who couldn't stick it out. Me, I was pretty well snowed in that night and listened to my teammates on Radio Reference, an online scanner.

Let's see ... what else happened? Well, there were a few calls that never really got off the ground, when SAR members responded late at night, only to hang out at the building until it was confirmed that the situations had been resolved by the helicopter or other means. Such is SAR sometimes.

And there were a couple of missions down in the West Fork of Oak Creek--searches for overdue hikers--and both ended well. As did a situation on the peaks, when two of my teammates were asked to go up there to help a couple who'd gotten a bit misplaced, not having a map. They didn't have the required (free) winter backcountry permit, either, so they had a little meet-n-greet with the Forest Service when they emerged from the forest. So that'll cost 'em a bit more than the free permit would have. (See a brief description of the situation on FlagScanner.com.)

At our recent monthly meeting, our team's coordinator said he attributes some of this slow-down in calls due to the fact that snow conditions have been pretty crappy, so skiers and snowboarders generally haven't been venturing out-of-bounds from the ski area or otherwise going into the backcountry. (That could change as of this weekend, though, because it's currently snowing quite heavily, and the storm is expected to dump as much as 18 inches here in town, with more on the Peaks.)

So, I don't have any recent firsthand SAR mission experiences to tell you about since back on New Year's Eve. But I have been doing SAR stuff, specifically practicing technical rescue skills. Back in November, I took my second class with Ropes That Rescue down in Sedona, Arizona, and I just finished a third. Here are some photos from the class. I'll post a video shortly.... 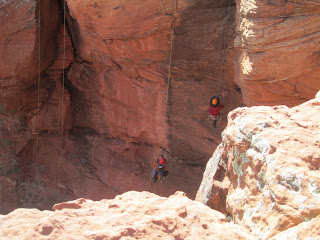 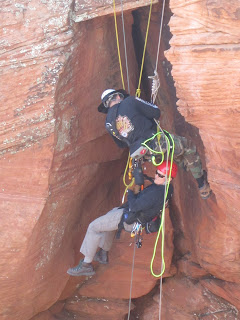 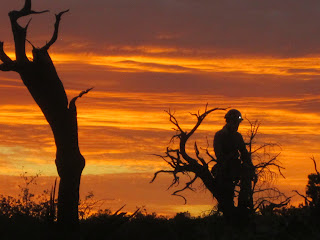 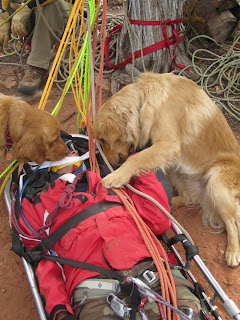 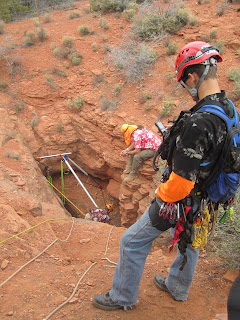 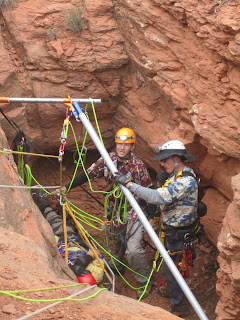 Some of your pictures are really interesting. I guess with search and rescue, not having a ton of new stories is a good thing. Have you gotten any book writing worked on? I keep sitting down to write and then getting distracted. Like now.