What A Long, Strange Trip

The search for Aubrey Sacco continues. As of today, she's not been heard from in a month--not since she departed on a solo trek through Langtang National Park, which she intended to finish on or before April 30th. Aubrey never boarded her plane to Sri Lanka on May 15th. She was supposed to fly home to Colorado one week later, ending her six-month trip to southeast Asia.

I have some time to write now, while we wait for an assignment from International SAR Coordinator, Valerie Chang from the Red Cross, who arrives in Nepal this evening. A number of groups and individuals from various parts of the world are now involved in the search, as well as Nepalis including sherpas from the Langtang area and the Himalaya Rescue Dog Squad. Aubrey's father, Paul Sacco, arrived yesterday and went directly to the Embassy, I believe.

So, back to the trip from Pokhara to Kathmandu two days ago, with Ingo, nine members of the Himalaya Rescue Dog Squad, and three beautiful dogs--Maggie and Hunter, both hounds from the U.S., and Aldo, a German Shepherd donated from Germany. 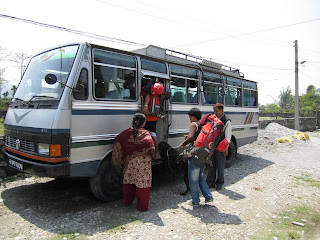 It was the craziest bus trip of my life. Eight hours it took to travel a distance of 200 kilometers. Everywhere I looked was a snapshot. Every scene was an essay waiting to be written. Every face was a portrait. It was overwhelming, especially to someone like me who wishes she could capture every detail and share it. For now, though, I'm reduced to simple phrases. Kind of an "I spy" of sorts as I leaned my face out the bus window for some hot, moving air and exhaust. I put my sunglasses on to spare my eyes from the dirt and dust.

A small, shriveled old woman carrying a woven basket full of river rocks on her rounded back;

Chickens crossing the busy road, and goats and dogs and cows and ducks;

A police checkpoint, where we have to stop;

Women in saris and high heels on the backs of motorbikes, their bright silky scarves billowing out behind them;

Street vendors, squatting next to their wares, spread on cloths at the edge of the road;

Street dogs sleeping in the dirt, on the concrete steps, at the side of the road, in the road;

Buildings, big and small, with uncovered windows and doors, leading into the blackness;

Old landslides ending abruptly at the narrow road they once covered;

People standing next to their immobile busses, cars, motorbikes, trucks, waiting for an accident to clear;

Busses bloated with breathing bodies driving through a blast furnace;

Gravel-laden trucks belching black smoke as they creep up the winding hill;

My life passing before my eyes as our bus passes another vehicle again, again on a blind curve;

Rock and water-filled gorges disappearing into the jungle;

A man clipping his toenails;

A young boy with a dirty face and grease-covered hands fixing a piece of machinery;

A man with a tube-shaped hat, carrying a large sack of something slung over his shoulder;

Children playing a game without toys;

People staring back at me.

And that was the first ten minutes. :) 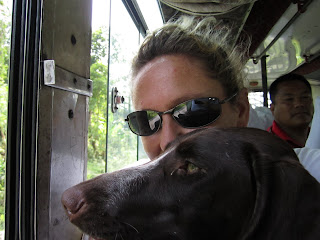