The Search For Aubrey Sacco 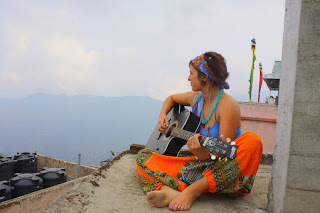 Wow. I came here to gather information to write a book about the Himalaya Rescue Dog Squad, and now I'm involved with a search. I'll soon be headed to the mountains with the team to look for American Aubrey Sacco, who was last heard from on April 20th when she emailed her parents and said she intended to make a solo trek in the Langtang area. She was supposed to finish that trek someime around April 30th, but no one ever heard from her. Aubrey later failed to get on her plane home on May 15th.  At this time, the last known (definite) point is where Aubrey signed in to begin her trek.

It's been frustrating, I have to say, sitting around, waiting to get on with the search. At home, when someone is reported missing, our team can mobilize very quickly. Not so here in Nepal, where the rescue squad is basically flat broke right now. So they wait for funds to be wired so they can move. (Which has now happened.) And a contract has to be signed. And they need some sort of letter from some government office, so they can enter the search area with their dogs. (I really have no idea how the government is run here, and, truth be told, it doesn't seem like most Nepalis know either. Right now, things are basically a mess in that department. And they could get even messier on May 28th, when the new Constitution is due.)

So today I pack up all my things again and get on a bus with searchers and dogs, headed back to Kathmandu. (Well, I get to experience that long bus ride after all!) Given that nothing holds us up along the way, we'll arrive back in the city late this afternoon. Then search teams, me included, depart for the mountains, probably tomorrow morning. I have no idea what the area will look like, but I know we're not talking the big'uns here. (I think we'll be up to about 14,000 feet.) So, no, Deb won't be using any ice axes or oxygen. But beyond that, I have no idea what to expect.

Well, as always, the power is out and I'm running low on battery again. But here are some related links you might want to take a look at:

Greely Man Heads To Nepal To Search For His Daughter

The blog Aubrey was keep until shortly before she went missing: Glitter The World: Spreading The Sparkle One Country at a Time