Written sometime in the middle of the night on Wednesday, May 5th (or 6th):

The word of the day is "adapt." Adapt to the surroundings, the circumstances, the culture, because Deb definitely is not in Kansas.

Flying into Kathmandu, I pressed my face against the window, looking for any sign of life or light in the darkness below. Were we still above the clouds at 11 miles out? (So said the computer screen on the seatback.) I couldn’t see a thing. Then, five minutes out, I began to see some twinkling lights, but nothing like you would expect from a city. And now I know why; the power has been shut down in Kathmandu, and what light there is is running on battery power or from candles. Good thing I brought my headlamp.

It's been a long time since I exited a plane onto a tarmac. And once the man who blocked the doorway, asking a flight attendant for some papers she didn’t appear to have, let us down the steps, there was no longer any direction--no men or women in purple jackets or dress suits to answer travelers' questions as there had been in Hong Kong. So I followed the small crowd--most of the passengers had gotten off at the stop in Bangladesh--who walked up to a row of kiosks and filled out immigration paperwork. (Good thing I brought a pen, which I then loaned to another traveler.) That done, I followed the "With Visa" sign, since I'd gotten my 90-day visa in advance from the Embassy of Nepal in Washington D.C. 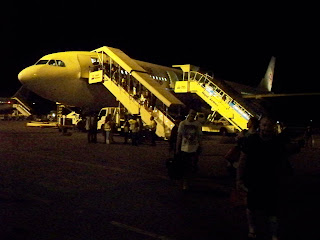 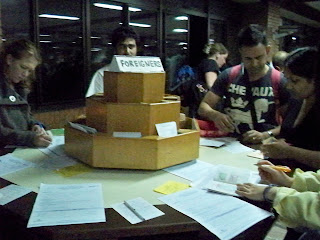 When I approached the man behind the tall desk, I opened my passport, pointed at the visa stamp and said to the top of his head, "They didn't write in an expiration date, but I leave on August 1st." He said nothing and didn't look up. He just wrote 8/2/10 on my visa, 90 days from today, and handed it back to me. I followed other passengers to baggage claim.

And yippee! My luggage arrived. I'd had my doubts and was resigned to the fact that I might have to wear those same travel-dirty clothes for at least another day or so. I even glanced over at the three somber men seated behind a table with a sign that read, "Mishandled Luggage: Complaining Desk." I was prepared to have to walk over and say--with a smile of course—“I'm not really complaining, but my luggage is missing.” Happily, that was unnecessary.

As I hauled my bags down the next hall and around the next corner--thinking, wow, I didn't bring enough stuff; these bags are pretty light-- I saw a bunch of faces on the other side of a glass wall. And I immediately recognized Karna. Then I saw the sign ("Namaste, Deb Lauman") he told me he and his friend would make, which they were holding against the glass, upside down. I waved, and they came around and met me outside.

After a quick hello, Karna and his friend (I didn't catch his name, only that he's Karna's partner at the cyber cafe they own) took my bags and loaded them into the trunk an old Toyota sedan. In turn, each of the boys reached up (because I'm significantly taller at 5-foot-five) and placed yellow satin scarves around my sweaty neck with a "Namaste, Deb. Welcome to Nepal."
(Photo: Karna and his friend have trouble opening the trunk of the car.) 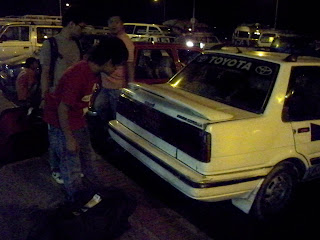 Then came the drive to Yolanda's hotel. It was a white-knuckler as we twisted and turned, narrowly avoiding concrete barriers jaggedly aligned down the middle of the road. The streets were deserted and the city dark. What I could see of it as we passed looked like bombed out buildings from the second World War.

Soon, we turned abruptly down a narrow alleyway, barely wide enough for the car. The two men in front (there was a third man--a driver who was also a friend, Karna said) didn't speak at all, and Karna and I were also pretty quiet in the back seat. He did say, though--or at least I THINK he said--something about having to take the (Maoist) strikes day by day, hour by hour, and this was a night they were able to drive. It would have been a very long and rather eerie walk to the hotel had they not been able to use the vehicle. [Later: I realized they took a risk coming to get me, though they were okay while I was actually with them, since I'm a foreigner.]

Suddenly, the car stopped (good thing I'd been bracing myself, or I would have tasted the back of the front passenger seat), and I hesitated as Karna and his partner got out. This was it? Apparently so. Dogs started barking behind a locked gate, and I soon heard a woman say, "Who's there?" No one else answered, so I said, "It's Deb. I think I'm staying here." Given the accent, I assumed the voice was that of Yolanda, Ingo's Swiss friend (though I don't know how or how well they know each other).

I asked Karna if I should pay for the ride. He didn't know, he said, and went around to the driver's side to speak to the man behind the wheel. The car sped off and Karna said nothing, so I followed Yolanda, who'd unlocked the gate and led us inside the dimly lit building and up a few flights of stairs. Karna and his partner followed with my luggage.

Yolanda explained that there may or may not be power in an hour or so. She showed me into my room and pointed out the bottle of water and candle on the small table. She said breakfast would start at 6:30a.m.

Karna and friend stood side-by-side in the hallway. How would they get home, Yolanda asked. Karna said they would go on foot. I asked Karna if I would see him tomorrow and if I could visit his cyber cafe. (There's no wireless here, so I'm writing this on battery power in the hopes I can send it from the cafe tomorrow.) Karna said he would come back in the morning. Yolanda asked him what time, and when he hesitated, I told him that I would be here whenever it was convenient and not to rush. I can tell already that this is not a city--particularly given the present political conditions and Maoist strikes--that I'll be exploring on my own.

When the two young men left and Yolanda closed the door behind her, the first thing I did was open a window. Two panes, each double locked. The room was a bit oppressive, so I needed to let in some air. I then pushed open the outer window and climbed out onto a veranda (I'm sure there's a door somewhere, probably from the hallway). I needed to try to get my bearings--where am I?--even in the dark.

(Photo: My small hotel room. Sorry about the lousy photo quality. It was late, and I still need to figure out the settings on my camera.) 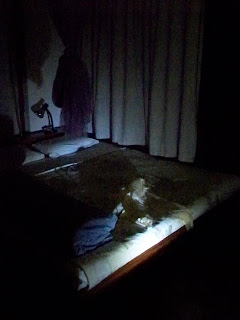 How quiet for a city. The only sounds I heard--and that I'm still hearing as I lie on the thin mattress by the open window--are barking dogs and, I believe, an occasional parrot. Oh, and crickets. I see only one dim light in a nearby window. But there are no traffic sounds. No people sounds.

And I had me a much-needed shower. A cold shower, but that's just a statement of fact, not a complaint. Why complain at all? Things are as they are, and I have no expectations. I'm just here to see and hear and learn and take it all in.

And the other word of the day--alone. It's one thing to be by yourself in familiar surroundings, even in places you've never been but that are familiar culturally. Here, though, halfway round the world in a place that, so far, bears little to no resemblence to my life at home, I feel very much alone. But I'm not afraid or nervous . I'm just here.

And so are the mosquitoes. Hence, the lavendar mosquito netting that's presently tied up above the bed. But rather than let it down, I think I'll attempt to end the lives of those that got in, close the screenless window, and try to daydream myself to sleep.

(Next day: Sending this off in a hurry. Karna and his friend, Dikpal, have opened their internet cafe for me to do this and check email, but we had to come in through a side door. The Maoist strike means all businesses, including this one, must be closed. Otherwise, they risk vandalism and then some. Trying to get a plane to Pokhara ASAP, to be where Ingo is. Kathmandu is not a place I want to hang out right now, though Yolanda's hotel is very nice and feels safe. Yolanda is helping me and another traveler get one of the limited planes out right now. More soon...)

I loved reading this article! It took me back to my trip to Kathmandu in 2005. Only at the airport there were armed guards with riot shields and machine guns. I was safe for the next 10 days. But our cab driver did pay money to the Maoists to let us thru once.

You are in for a treat and I want to read a blow by blow! Have fun.