Over The Edge: Technical Rescue Simulation

Most of us didn't know this would be a simulation instead of just a regular training session--not until we got to the site and were suddenly given a briefing and our initial assignments. But as flustered as I was at first, I'm glad we did this and hope we'll do more mock technical rescues in the near future. Putting skills together under pressure (and, simulated or not, I definitely felt the pressure) is a good way to test yourself and the team--to really see where improvement and more practice is needed.
So, there were two victims over the edge following a car crash. (Drunk driving, I heard.) This was considered "steep angle" terrain, not low-angle and not high-angle (a cliff) either. The footing was precarious, with loose rocks all over--a significant hazard for both rescuers and victims below ... which is why one of the victims got up and moved when I started coming down with the first litter, dislodging rocks as I went. Definitely something I need to pay more attention to and not descend directly above anyone. Big note made to self on that one!
Matter of fact, my notes to self during yesterday's exercise (well, exerciseS, because we did more than one) could have filled several notebook pages if I'd written them all down. They included things like, "Practice, practice, practice your knots, Deb," and "When on a steep-angle raise, attach a prusik from my harness to either the main line or belay line, and another from my harness to the litter, and lean back; let the haulers do the work and don't try to lift the litter." Boy, did I learn that second thing the hard way!
Here are some photos from the day's first exercise:

As part of the hasty team, Sueanne (in black) prepares to rappel down to one of the two patients to asses his condition. Meanwhile, another member of the hasty team (not in the picture) rappels to the second patient... 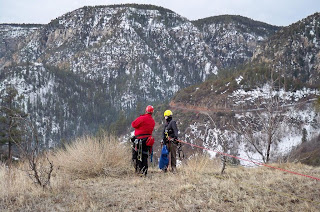 Robert sets up a wrap three/pull two anchor for a raising system.... 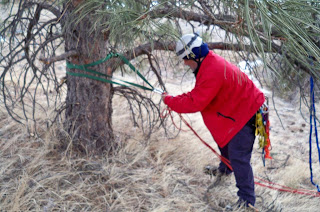 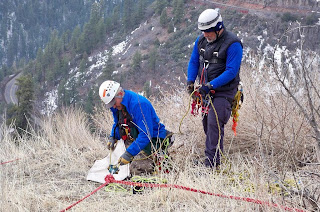 And in other news...
It looks like I'll be attending a 7-day Ropes That Rescue "Mountain Rescue Workshop" down in Sedona in February. I definitely need to have my knots down pat by then!

And I want to thank the latest supporters of my HRDSN book project for your pledges:

It's definitely one of those "use it or lose it" skills! I'm afraid I'd be hard pressed to tie a swiss seat, anymore :(

Swiss seat ... hm, that's a new one for me! Or maybe it's something I'm familiar with but by a different name. I have so much yet to learn!