Twenty-four new members have now been added to our General SAR team following yesterday's "final exam," a mock search and rescue in the Walnut Canyon area in Flagstaff.

The call-out came at about 10:30am on Saturday, when students and experienced team leaders and assistants responded to the SAR building, as they would for a real call-out.

Once everyone was assembled and the gear loaded, our Captain (pictured here) made sure everyone was accounted for. We were then briefed by our Coordinator and formed into field teams before heading to the staging area. 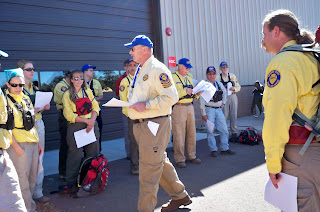 Our Coordinator, who would be acting as IC (Incident Command) along with our Captain, had no idea where the two lost subjects were located. Only the subjects (volunteers from our team) and one other member knew their location.

When we arrived at the staging area at the subjects' PLS (Point Last Seen), we team leaders were given our assignments and then relayed that information to our field team members. Team leaders were all experienced SAR members, whose job it was to answer questions if asked and make suggestions if necessary to "keep the ball in play." But it was up to the new folks to work together and figure things out, while navigating and using the radio to communicate with IC and with other teams.

In this photo, my team hikes part of the Arizona Trail, calling the subjects' names, blowing whistles and interviewing passing hikers, horseback riders and mountain bikers. They also looked for boot tracks going off the main trail. 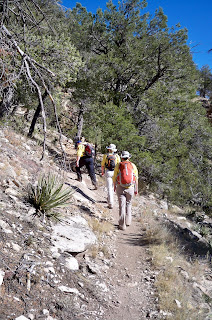 Eventually, another field team located the reporting party--one of the two missing hikers--who'd left his injured companion and climbed up out of the canyon to get a cell phone signal to call for help. Since the initial call, his cell phone battery had apparently died, preventing any further communication. And he'd been lost, he'd said, at the time he called.

This one subject, while still confused about where he was, was able to give some details which helped the team locate the second subject at the bottom of the canyon. A (real) witness description from a child hiking with her parents also helped the team find the injured hiker.

Once the second subject was located, other field teams converged at that location, including the "evac team" with the litter and other medical equipment. 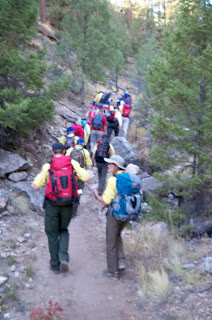 Then, the new members splinted the patient's (fake) broken ankle and were shown how to package her in the litter. Everyone had a chance to help carry the patient out. 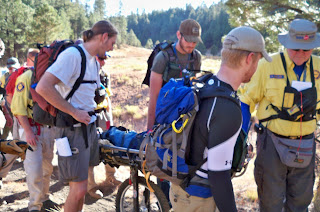 Kay was such a good sport! She and Jerry--the other lost subject--had to sit around a long time before they were found. At least it was a warmer than usual Fall day. 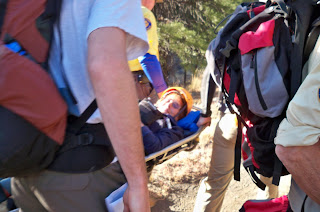 Despite some confusion with radio communication--which is to be expected with so many field teams and new members--things went really well.

I wish we always had this many people to carry a litter! 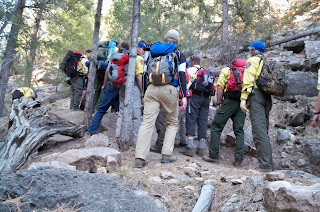 We finished up the mission and were back at the SAR building around 6:30pm.

Later that night, there was a real call-out at 8pm. That one (for an injured hiker on Mt. Agassiz) was canceled after about five minutes, when the hiker made it to the parking lot and refused further assistance. But there was another call at 4:00 this morning. That call was also canceled, but not before about fifteen volunteers, both new and not, responded to the SAR building and loaded gear.

Hopefully, the turn-out will continue to be that good.