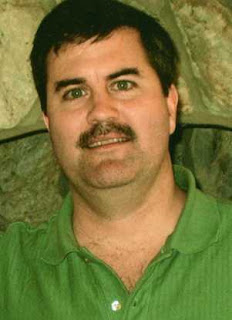 I'm back home now after a day and a half at Grand Canyon, helping with the ongoing SAR mission there. As I type, I'm listening to the live audio feed from the Canyon, trying to keep tabs on the search for 43 year-old Anthony Brunelli of North Carolina (pictured here), who's been missing since Monday, August 31st, when he was last seen at the South Rim entrance around 5am. His rental car was later found at the Grandview trailhead, which is east of Grand Canyon Village and the South Kaibab Trail.

On Sunday, four of us from Coconino County SAR headed to Grand Canyon where, after a 6am briefing, we were given our assignments and joined the search, which had already begun. Each of us was assigned a team leader and inserted by helicopter into various locations in the relative vicinity of the Grandview Trail and Horseshoe Mesa, though often miles away. We'd have to work our way back towards that area as we searched.

This was quite an adventure for me, not only seeing how SAR at Grand Canyon operates but also getting my first helicopter rides in and out of that awesome place. I also saw part of the Canyon I'd not been to before, including Grapevine canyon and the six miles of the Tonto Trail between there and Cottonwood drainage, parts of which are right along the edge of a very long way down.

I was assigned to work with a volunteer member of Coconino County SAR who also happens to be a Park ranger. He was great company and very supportive when I expressed my anxiety about the exposure along the Tonto Trail. We played some fun (okay, sorta silly but effective) memory and word games as we hiked along those stretches, which helped me focus on my brain rather than on my fear, though I kept close watch on the trail and took careful steps. Having tripped over my own trekking poles in the past, I didn't want that to happen there.

The scenery, though, was just incredible, which I couldn't help but marvel at as we searched. My partner and I made our way up both forks of narrow Grapevine canyon and then searched Grapevine in the other direction, towards the Colorado River, until the route became too technical to proceed without ropes.

Once we were finished with that part of our assignment, we took a break in the shade as the temperature in the sun topped 100 degrees Fahrenheit. But we decided to proceed onto the Tonto Trail midday, as some cloud cover eventually helped mitigate the heat. We each had over a gallon of water left to make the trek to our intended campsite and the water cache back at the Cottonwood drainage, so we both were comfortable with setting out then rather than waiting till late afternoon.

As we hiked, we both looked up and down washes and scanned the area for any sign of ... well, anything unusual, including a bit of color that didn't fit or increased bird activity. And I periodically stopped and looked behind me for a different view of what we'd just passed, not wanting to miss anything. As of late afternoon, when we reached Cottonwood Creek at the cache, we hadn't located any clues.

After staying the night at Cottonwood drainage with two other search teams who converged there, while others camped in different areas around and on Horseshoe Mesa, most of us were "extracted" the next morning and exchanged with fresh teams. One of my CoCo SAR teammates--also a Grand Canyon PSAR volunteer--was reassigned to work with K-9 teams brought in from another county, while the rest of us were debriefed and then headed back to Flagstaff.  We were willing to stay on and continue to help, but apparently the Park had enough personnel to handle things at that point.

For more information on the search, see the National Park's latest News Release at http://www.nps.gov/grca/parknews/news-_2009-09-08_search.htm

Thank you for your efforts searching our friend and co-worker. There are many people watching and hoping that you are successful.