I Passed! (And Other News) 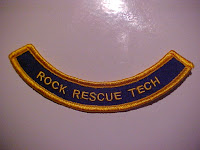 Yyyyyyaayyyyyy! I'm a very happy--and very relieved--SAR girl. I had test anxiety all last night and this morning before I began demonstrating my new technical rescue skills, as my experienced teammates watched at each test station. I had no idea how it all would go, but I'm happy to report that ... well, I didn't suck. :)

I started off at the patient packaging and litter rigging station, moved on to ascending and rappelling with a hot changeover on the rope, then went to the pick-off station. (A pick-off is what you do when someone is stranded over the edge, either on a rope or "unsupported," perhaps clinging to a rock face.) Next I set up belay systems, anchors and mechanical advantage systems, and then tied a bunch of different knots and a load-releasing hitch. I had to explain a pre-tensioned back-tie, make improvised chest and seat harnesses, and be checked for having the required personal tech gear.

When I had gone through all the testing stations, my checklist was completely marked off and initialed by the instructors. Phew! And then I got my new rock rescue patch for my SAR shirt. (Yay! again.)

I'd been a little worried that I hadn't practiced QUITE enough right before the test, since earlier this week I'd opted instead to go backpacking in Grand Canyon for four days with one of my friends from the team. She's a volunteer for the Park Service and had an opportunity to hike the South Bass Trail to check some archaeological and historical sites for the Park. And she invited me to come along. Neither of us had ever hiked this amazing and rather remote trail, so I could hardly pass up the chance, though I'd miss two final pre-test tech practice sessions.

But I'm really glad I decided on the hike. Here are some photos:

This is one of the archaeological sites we looked at--granaries used by the Anasazi. We also saw the remains of the (William Wallace) Bass Camp, the Ross Wheeler Boat on the rocks above Bass Rapids (abandoned in 1915 by Charles Russell and August Tadje after an unsuccessful attempt at running the river), some agave roasting pits and other evidence of past human residents of the Canyon.... 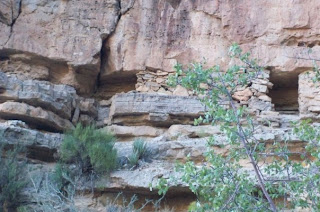 This is a view from the Esplanade, 1300 vertical feet and a 1.3-mile hike below the South Rim. The Esplanade in this area is covered with vegetation, whereas in other parts of the Canyon it's nothing but rock. Here, we cached a couple of gallons of water where we'd camp on our return trip to the rim.... 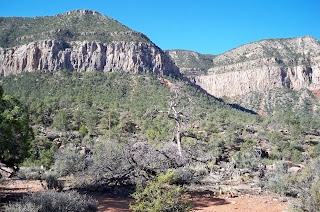 After leaving the Esplanade, we descended another 3,000 or so vertical feet over another 6.5 miles to the Colorado River, passing through this narrow side canyon in the Redwall formation along the way. We were glad for the shade on that part of the trail as the temperature soared midday.... 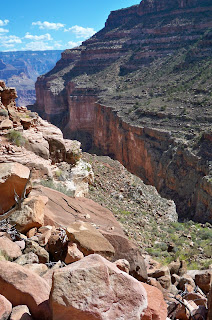 By the time we got to the Tonto platform and below, we were starting to roast, but we knew the river was getting closer. 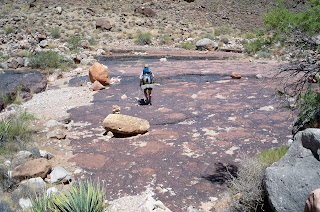 This was our first view of the Colorado River below, which we couldn't see or hear until we were less than a quarter mile from the point where we scrambled a couple hundred feet down to the beach over some VERY hot rocks... 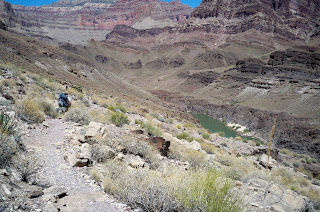 We were relieved to get to the water to soak our feet and rest in the little bit of shade provided by some willows. We spent the afternoon and evening on the beach as some river runners floated by, listening to Bass Rapids, watching butterflies, birds, lizards and, later that night, the stars as we slept on the sand. 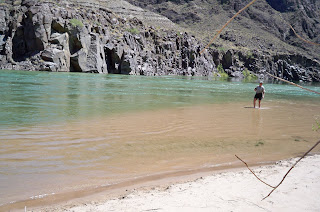 And this is the old and somewhat battered Ross Wheeler boat on the rocks above Bass Rapids.... 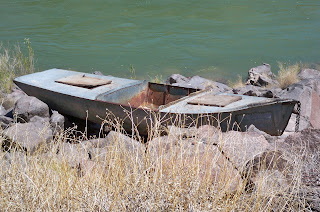 Anyhow, I could yack on about the hike--one of my all-time favorite Grand Canyon trips--but to get back to SAR stuff....

I wanted to mention a nine-hour mission that took place last Sunday, the day before I left for the Canyon. Make that nine hours of driving, with me bouncing around in the backseat most of the time. I mean, these were some of the worst dirt roads I've ever been on. I think my head hit the roof of the vehicle a few times, even though I was wearing my seatbelt. Needless to say, I was very relieved (and my neck, back and backside were very sore) when we finally returned to pavement after finding the overdue West Clear Creek (canyon) hikers at the trailhead and transporting them to their friend's vehicle. They were tired but in good health, which is always what we hope for, so my sore self was happy about that.

Ummm ... so, I guess that brings my blog up to date for now. And now I'm off to find a needle and thread to attempt to sew my Rock Rescue Tech patch onto my uniform shirt. (Yay! just one more time.)

Congrats, Deb,
Technical rescue is a demanding and complex skill set and you should be proud of your accomplishment!
Thanks for doing what you do.
Glad you were able to squeeze in the Grand Canyon trip as well. Looks like it was a blast.