P stands for "Preventative." And, this past weekend, following the series of storms that dropped 92 inches (yes, that's nearly EIGHT feet) of new snow on the San Francisco Peaks, a teammate and I took one of the P-SAR shifts at the top of the Agassiz chairlift (11,500 feet) at Snowbowl. The backcountry was officially closed due to extreme avalanche danger, so we were supposed to--try to--stop anyone from going out of bounds, or, if they insisted, to check to see that they had working avalanche beacons and survival gear. 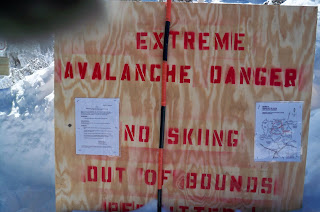 If they got into trouble out there, they'd be on their own ... not to mention risk criminal prosecution and a heavy fine for disregarding the official closure.

Luckily, we didn't have to stop anyone, because no one tried to go beyond the boundary rope ... at least, not where we were hanging out by the Ski Patrol shack. That common exit point was piled high with snow, with the sign pictured above blocking the way. 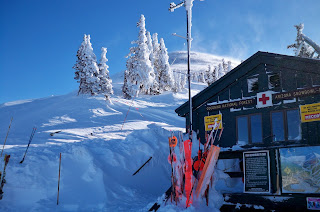 While no one tried to go out of bounds, apparently heeding the warning signs at the base of the ski area as well as the one where we were stationed, a few skiers and snowboarders did ask questions, including about when the backcountry would be opened. We couldn't really answer that, but we advised people to keep a lookout for a press release as well as word from Snowbowl on their website. (See the "News & Events" links on the homepage.) They could also call the Peaks Ranger District at (928) 526-0866 for information.

We did overhear talk amongst Snowbowl management and the Forest Service Ranger on duty there, who were reviewing information from an aerial survey of the avalanche conditions on the mountain as well as work that was being done on the ground, and we know they will open the backcountry as soon as they deem conditions reasonably ... well, is "safe" the right word?

Anyhow, it was beautiful up there, even with the wind chill on top of the 6-degree temp when we first arrived at the top of the lift line. It sure was nice to have the warm ski patrol hut to retreat into when we could no longer feel our noses or toes.

Here are a few more photos from the top.... 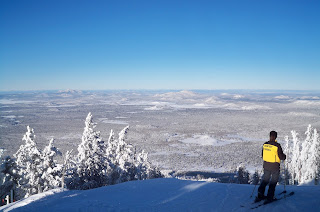 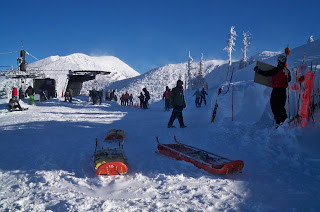 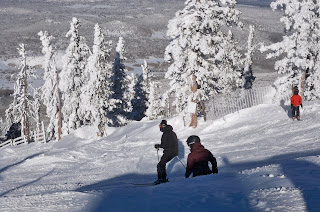 Email ThisBlogThis!Share to TwitterShare to FacebookShare to Pinterest
Labels: PSAR

Yeah, hard to believe isn't it? But that's what the paper said, sooooo ... I guess it must be true, right! And it sure looks like that much, too.