Recently, at both the Arizona State Search & Rescue Conference and last night's Coconino County Board of Supervisors Meeting here in Flagstaff, our Coordinator, Sergeant Aaron Dick, and volunteer Dennis Gill were both honored for their excellent work with the team. Aaron was awarded Arizona SAR Coordinator of the Year, and Dennis, who's been with the team for 25 years, was given the award for Arizona SAR Volunteer of the Year. 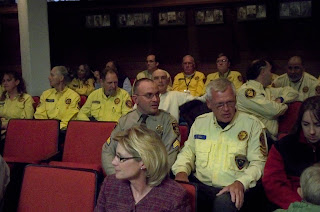 That's Aaron on the left (behind the lady in purple) and Dennis on the right.


Many of our team members showed up to support Aaron and Dennis, wearing our uniform shirts. Half the room was a sea of yellow. 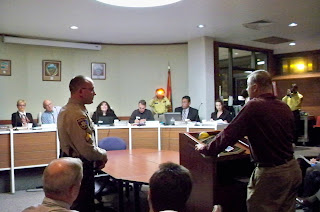 And there's Beverly, sneaking in behind the Board of Supervisors to take pictures as Sheriff Bill Pribil presents Aaron with his plaque.

I know the whole team was proud of our leader and of Dennis's years of volunteer service. They're both so great at what they do and totally deserve the recognition. Congratulations, guys!

And as far as recent call-outs go...

On Monday morning, the team began a search in the area of Sycamore Canyon for two overdue hikers, who'd intended to go for a dayhike on Saturday. The team had fanned out to first search for their Jeep, because the reporting party--the wife of one of the hikers--was unsure of their exact destination. The plan was that, once the vehicle was located, that team would begin a hasty search on foot.  But the two subjects were able to make a cell-phone call to the reporting party before we found their Jeep. They emerged uninjured from the canyon a short time later, having been lost for 48 hours without cell service. See: Overdue Hikers Emerge Unscathed from the Arizona Daily Sun.

And this morning, there was a call regarding two overdue hunters, but they too showed up as SAR was en route.

(On a side note: if you're receiving these blog posts by email and the photos are messed up ... sorry, I'm trying to figure out why that is. In Yahoo! mail at least, the photos are overlapping the text for some reason. For now, I guess you'd just have to click on the title to read the post and view the photos on the blog itself, until I can come up with a fix.)